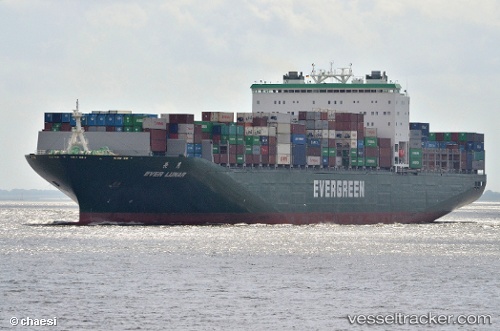 Taiwanese carrier Evergreen Line announced on 27 December that another 8,508teu box ship, Ever Lunar, is scheduled to join its Far East - Arabian Persian Gulf (APG) service in January. This is the seventh Evergreen L-type vessels to be built by China Shipbuilding Corporation (CSBC) in Taiwan. "Evergreen has taken delivery of six L-type vessels from CSBC, assisting in our on-going fleet renewal programme, which is enhancing our competitiveness and operating performance," said Lee Ching Ko, second vice-group chairman of Evergreen Group. Lee is confident that Evergreen can benefit from the recent forecast of market growth and record an increase in profitability. In addition to the fleet renewal programme, Evergreen is consolidating co-operation with its partners, including those in the CKYHE alliance, to provide more service and strengthen its competitiveness. Source: IHS Maritime 360

Evergreen Group held the naming ceremony for EVER LUNAR today, the seventh of its L-type vessels to be built by CSBC Corporation in Taiwan. The ceremony, which was officiated by Ms. Lee-Ching Ko, Second Vice Group Chairman of Evergreen Group, took place at CSBC's Kaohsiung shipyard. The official rope-cutting of the new 8,508 TEU vessel was performed by Mrs. Lin, Mei-Chun. EVER LUNAR is owned by Evergreen Marine Corporation (Taiwan) Ltd. The ship is 334.8 meters in length, 45.8 meters wide and has a draft of 14.2 meters. In common with its L-type sister ships, EVER LUNAR can cruise at speeds up to 24.5 knots. The ship will be delivered into service in January and join Evergreen Line's Far East - Arabian Persian Gulf (APG) Service.