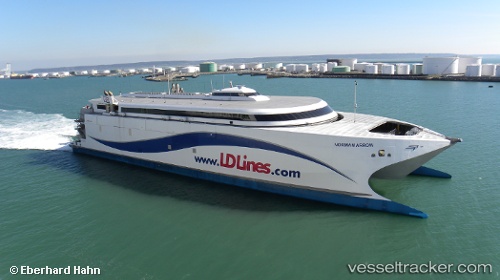 The "Express 1" suffered a broken engine on July 27, affecting all departures to and from Bornholm for both the "MAX" and the "Express 1" on that day and on July 29 as the ship slowed down after it lacked an engine. During the repairs, the Bornholm Line has sailed to completely new timetables. Departures were delayed between twenty minutes and up to 3,5 hours. But the Bornholm line has chosen not to deploy the "Povl Anker" or to change ferries passengers should sail with, despite the hour-long delays as not to cause too much confusion. They expected the engine to be operating again on July 30.

In the morning of July 4, 2019, the "Express 1" suffferd a problem with the electric system of the bow thruster, which delayed the ship for just over an hour. She sailed out of the port of Rønne and headed for Ystad at 4 a.m., one hour and one quarter later than scheduled. The delay affected all departures until the afternoon. Messages were sent to passengers with reserved tickets.

Just after its departure from Rønne on May 10, 2019, bound to Ystad, the "Express 1" was in collision with the Polish charter f/v "Baltic Condor" of the Baltic Condor Kolobrzeg which operateds from the port of Kołobrzeg and had 12 pesons, nine charter guests from Saxon and a crew of three on board. One man fell overboard. He was rescued from the water and taken to shore. He had breathing problems and one broken rib and was medically treated in Rønne. The SAR boat "Rescue Mads Jakobsen" (MMSI: 9256080) towed the "Baltic Condor" back to port where she was safely berthed. The accident happened in dense fog. The "Express 1" was timewise replaced by the ferry "Povl Anker" on the route from Rønne to Ystad jointly with the "Max". At 8.30 p.m. the investigations into the accident and surveys of the ship were completed, and the "Express 1" was allowed to resume sailing. The master and one officer were released from their duties by the company. Danish reports with photo and video: http://www.tv2bornholm.dk/?newsID=224724&fbclid=IwAR0CwrCJw8AozYboCruD1tdHlm6qDjf82Q5Lje6vH7xxHKOgnMEfZijWw7k http://www.tv2bornholm.dk/?newsID=224728&fbclid=IwAR0-__y1JpNjjxQj06TVCU7GgE4jK64a0lwnZNrQNy2l4UiMasx7WWx-uDM