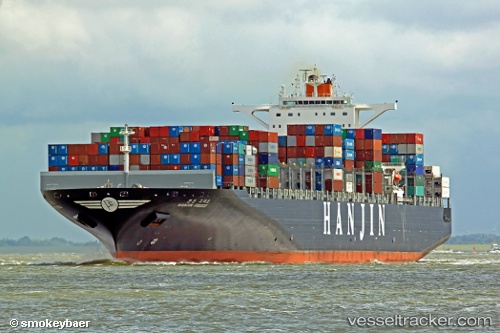 Hanjin Shipping vessels return to Oakland this week for the first time since the Korean container carrier filed for bankruptcy and stopped taking cargo in late August, roiling the trade industry. Among the first Hanjin ships to berth at U.S. ports this month after weeks of idling in the water, the Hanjin Greece is expected to berth late Wednesday afternoon at the Port of Oakland, followed by the Hanjin Boston arriving Friday, according to the port. The ships first arrived earlier this week in Southern California after a two-week logjam. The Seoul-based firm, which is reportedly billions of dollars in debt, sought protection from creditors as crews waited offshore, and many of its ships were seized or denied access to ports around the world. “For the sake of customers with cargo on those ships, we’re glad this day has finally come,” said Port of Oakland Executive Director Chris Lytle in a statement. “Businesses can’t operate with products stuck at sea.” The Hanjin Greece will unload about 450 loaded import containers in Oakland, according to the port. The Boston will unload about 64 import boxes. Terminal officials have said they will release Hanjin import containers to customers if they are paid in advance for cargo-handling. Source: East Bay Times

LONG BEACH, Calif. - A Hanjin container ship that was stranded off the California coast for more than a week began unloading Saturday after a judge protected the global shipping giant from having its assets seized in the U.S. as it struggles to avoid bankruptcy. The 1,145-foot-long Hanjin Greece began unloading tons of imported clothing, electronics, furniture and plastic goods, Port of Long Beach spokesman Lee Peterson said. "This is good news for cargo owners and American consumers, just in time for the holiday shopping season," Noel Hacegaba, the port's chief commercial officer, said in a statement. The Greece was one of four vessels that were blocked from entering or leaving the port after Hanjin filed for bankruptcy protection on Aug. 31 in South Korea and the U.S. on Sept. 2. Creditors had refused to extend it any financial aid.