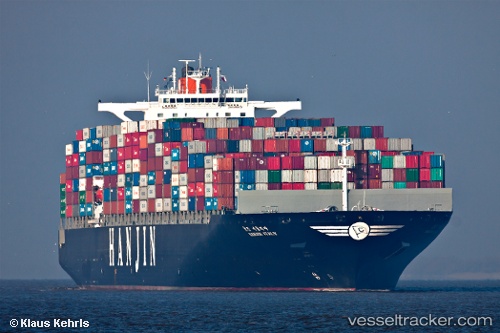 After the collision with the "Al Gharaffa" off Singapore on Dec 29. 2013, the South Korean shipping company Hanjin has chosen to lay up the only three year old container ship. The "Hanjin Italy" thus became one of the largest container ships lying idle.

The "Hanjin Italiy" remained at anchor off Singapore after its collision with the "Al Gharaffa" on Dec 29, 2013. The "Al Gharaffa" had sailed from Ras Laffan Port on Dec 19. The bow of the "Al Gharrafa" was significantly damaged in the accident in the Malacca Strait between Batam and Singapore. The "Al Gharrafa" hit the "Hanjin Italy" on the starboard side which was dented and part of the cargo damaged. There arwere e no reported injuries of seafarers, no damage to the containment system, no pollution risk or other impact on the environment. As at January 3, 2014, the "Al Gharrafa" was safely at anchorage in Singapore. The classification society has surveyed the vessel and stated that the incident did not adversely affect the vessel’s integrity or ability to sail. The incident was under investigation and OSG Ship Management (UK) Ltd, as manager was working closely with the appropriate authorities. It was unclear, as yet, if the LNG cargo will need to be offloaded from the Q-Flex. The "Al Gharrafa" was en route to Tokyo Electric Power Co’s Futtsu LNG terminal in Japan. The vessel, in which OSG has a 50.1% stake with Qatari shipowner Nakilat holding the balance, is on long-term charter to Qatargas. Regarding the "Hanjin Italy", hte Danaos company was in the process of securing a berth at Singapore in order to discharge the cargo, so the vessel can proceed for repairs. The vessel was en route from Singapore to Yantian, China at the time of the incident. Photos: http://www.flickr.com/photos/haryadi_be/11623139233/ Imagination: http://www.localizatodo.com/mapa/?zoom=14&latitud=1.2&longitud=103.9&pais=es&tipo=3&presenta=0&zlat=1.2&zlng=103.9&zcalc=1&ztalc=180&zplay=0&year=2013&mes=12&dia=28&zhora=12&zminu=0&UTC=1&mmsi=636015019&mmsi2=538002920

On Dec 29, 2013, the "Hanjin Italy" was in collision with the LNG tanker "Al Gharaffa" off Singapore which had sailed from Ras Laffan Port on Dec 19. The bow of the "Al Gharrafa" was significantly damaged. Both ships remained at the anchorage off Singapore after the accident.