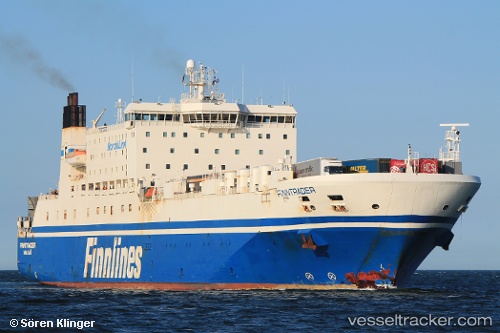 Man fell over board off Gedser and was found alive

Lifeboats from both Denmark, Sweden and Germany, from where the lifeboats "Theo Fischer“ and "Arkona" were deployed, as well as the patrol boat "Diana" and the "Enø", "Kureren" and "Havørnen" of the Home Guard and helicopters were alerted in the morning of Oct 16, 2018, after a53 year old man fell over board from the "Finntrader" in the Baltic Sea south of Gedser. He had last been seen the previous evening and did not show up at 6 a.m. By 11.50 a.m., the authorities confirmed that the man, 50 years old and from Sweden, has been found alive by an SAR helicopter from Roskilde. He was hoisted and flown for treatment to the Rigshospital. His condition was called critical. He was hypothermic and placed in an artificial coma in hospital. The vessel had been underway on its regular service between Travemünde, where she had sailed at 2 a.m., and Malmö.