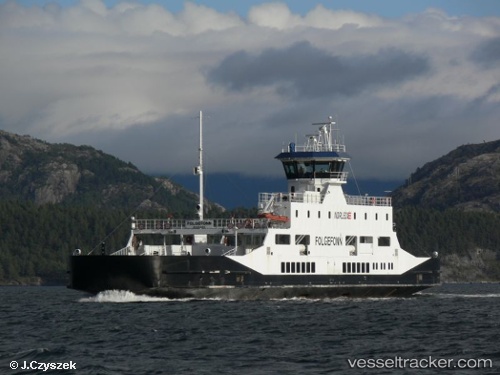 A ferry owned by Norwegian operator Norled is the first in the world to experiment with autodocking technology. Equipped with Wärtsilä’s innovative autodocking system, the 83-meter ferry Folgefonn concluded three months of testing with harbor docking trials in April. The autodocking system activates some 2,000 meters from the berth and keeps the vessel transiting at its normal transit speed until it gradually slows down to activate the line-up and docking maneuver. The vessel operates completely automatically until secured at the berth. Full maneuvering of the vessel, including the steering and propulsion, is automatically controlled by the software, with manual intervention and control possible at any moment if need be. At no time during the tests did Folgefonn’s captain need to take manual control of the vessel. https://www.marinelink.com/news/autodocking-norwegian436844

The "Folgefonn" had to quit the Jektavik-Nordhuglo-Hodnanes service in the foremidday of Sep 14, 2014, and was docked in Jektavik. The ferry had a problem with the cooling problem system, and a frequeny converter should resolve the trouble, but it was uncertain how long it would take to get the problems sorted out. The Ferry was replaced by the "Fitjar".

On Dec 22, 2014, at 7:09 a.m. the ferry service Jektavik-Nordhuglo-Hodnanes was suspended because the "Folgefonn" had suffered technical trouble. The ferry was on its usual route when an engine error caused a full stop. The Coast Guard towed the drifting ferry to Sunde where the passengers were disembarked, while Norled was looking for a reserve ferry. Norwegian report with photo: http://www.sunnhordland.no/article/20141222/NYHENDE/141229967