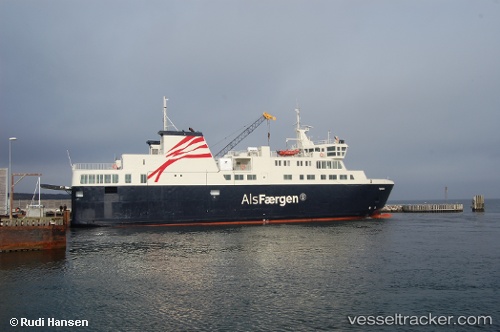 On Oct 23, 2018, the "Fynshav" allided with a pier of the ferry terminal in Bøjden. Passengers had to wait an hour to get ooff the ferry at 4.50 p.m. The ship hit the pier at low speed after powerful gust pushed the stern and end turned the ferry so it hit the quay. Using the ferry's engine power and mooring lines the ship was slowly pulled to its berth. This meant that it took about an hour before the passengers could land. Subsequently the company canceled the rest of the day's departures to Fynshav. The ferry suffered some scratches, but no one was injured in the impact. On Oct 24 at 4.40 a.m. the ferry sailed again. Danish report with photos: https://www.fyens.dk/faaborg-midtfyn/Passagerer-fanget-i-en-time-Alsfaergen-gik-paa-molen/artikel/3295165?fbclid=IwAR1aFIFQFJL7xm6V0ggAYzX8FOB8K3ZrsTavFdd7RcKND4AMaHEFVnZsXX8

On Aug 8, 2018, the "Fynshav" diverted from its route between Bøjden and Fynshav to a capsized sailing ship. Both a rescue helicopter and the fery were routed to the scene in the afternoon after an emergency flare was observed. The two people on the sailboat, a 66-year-old man and a 61-year-old woman, were surprised by heavy winds and capsized in a gust off Asserballe at Als. Alarm was raised at 3:43 p.m., and the two people were finally saved by a private boat.

Sailings from Funen cancelled due to mechanical trouble

A mechanical problem on the "Fynshav" meant a cancellation of the sailing on Aug 24, 2015, from Funen. A spare part had to be transported from Frederikshavn to Bøjden first. This meant that in strong winds the "Frigg Sydfyen" which was also sailing on the route until the end of August could not back out from the basin in Bøjden as the risk of running into "Fynshav" was too great. Therefore, for about four hours there were no sailings on the route until 2 p.m. The problems apparently have not been resolved yet, further sailings had to be cancelled later in the day.