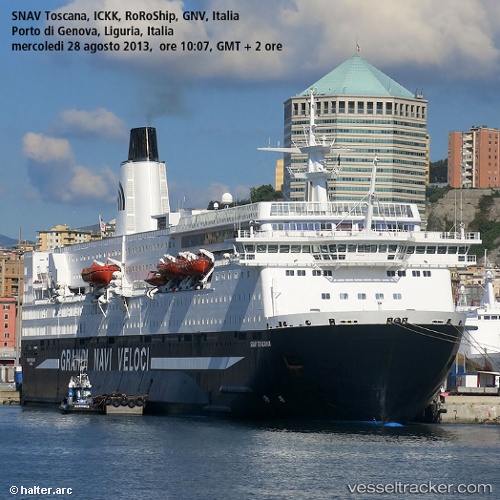 Five migrants who arrived on Aug 30 with rubber dinghy at the beach of Punta delle Formiche, in Pachino, were tested positive for coronavirus on Sep 1. They were transferred aboard the quarantine ship 'Azzurra', which is at anchor in the port of Augusta. For the embarkation, the ship moored at the quay in order to facilitate operations, under the watchful attention of the police.

On Aug 9 around 8 a.m. the 'GNV Azzurra' stopped off the north coast of Trapani, just beyond the Torre di Ligny with its cargo of migrants, coming from Lampedusa. After a series of meetings in the prefecture, where the prefect Tommaso Ricciardi brought together the provincial committee for public order and safety, the authorities chose not to have the ferry moored in the port, but to keep it at anchor, at least when the marine weather conditions allow it. In the morning of Aug 10 there was a mooring at the quay to allow some technical operations, supplies and more, then the ship returned to the ancorage. On board, in addition to the crew and staff of the Italian Red Cross, and among these also the cultural mediators, there were 603 migrants. Of these, a good 70 percent were made up of Tunisians, then there were some families of sub-Saharan origin, with women and children. About ten were unaccompanied minors. At the moment everything was going well both for security checks and for assistance on board, the situation on board was described as good. On shore, assistance points have been set up in case of emergency or in view of the ship's entry into the port. Among the 603 migrants, about 30 have tested positive for Covid 19. The quarantine on board the ferry will last about ten days for them, it will not end before Aug 17. One of the 4 decks was reserved for those who have tested positive or even for those who have been in contact with them. The other decks are used separately for families, for women and children and for men only. The surveillance at sea is guaranteed by the patrol boats of the Guardia di Finanza and the Coast Guard. Carabinieri, Police, Fire Brigade and medical personnel were also on the ground at the emergency point. Bureaucratic procedures will also be launched soon for those who have the right to apply for refugee status. If there is no room in the Milo detention center, the prefecture is considering their accomodation in a former industrial warehouse now confiscated. Tunisian migrants, on the other hand, will be subject to repatriation.

12 new cases of positive COVID-19 tests were reported aboard the ' GNV Azzurra' as well as six uncertain cases duringthe nasopharyngeal swabs aming the 350 migrants who arrived from Lampedusa. The infected were all placed in a special area that is isolated. In the meantime, the 'GNV Azzurra' was underway to Lampedusa, after having refueled and supplies at the port of Augusta, where she will have to embark another 350 guests from the reception facility. The arrival was scheduled for noon.