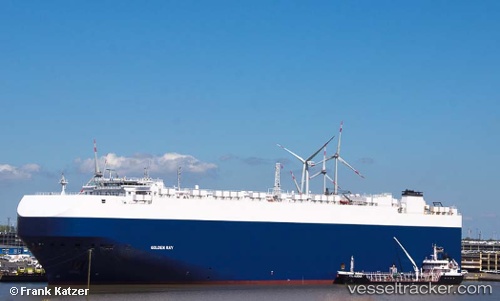 Five months since the last piece of the 'Golden Ray' was removed from the St. Simons Sound, the Glynn County filed a lawsuit suing for damages brought on by the shipwreck. The county is going after GL NV24 Shipping, which owned the 'Golden Ray', 'Hyundai Glovis' and several other companies involved with the operation. The lawsuit accuses the defendant of negligence, saying the vessel was loaded with too many vehicles up high, making it top-heavy and at risk of capsizing. The lawsuit claims the defendants are responsible for what it has cost the county to remove oil and wreckage from the environment.

The cleanup phase of the 'Golden Ray' salvage operation has hit rock bottom. After plucking the last of 80 well-entrenched piles from the St. Simons Sound over the weekend, crews were preparing now for the final step to rid the water between Jekyll and St. Simons islands of all things. That step involves scooping up several thousand tons of aggregate from the seabed of the sound. The crane barge 'Pacific Horizon' was being refitted with a clamshell scoop, which is better to shovel up some 6,000 tons of aggregate rock from the seabed. The crew should have the clamshell attached and ready to begin removing rocks in about 10 days. The aggregate rock will be scooped and loaded onto a barge, but ultimately the rocks will be dropped back into Coastal Georgia waters again. This time, however, the rock will be used to enhance state-run offshore artificial reefs. The rock will go on reefs A and F, both of which are DNR-managed reefs about 8 nautical miles offshore from the St. Simons Sound. The rock will establish the foundation to further life on the reef and join concrete rubble and other structures at the artificial reefs. Although the substrate is manmade, the encrusting organisms and other marine life that will inhabit the reefs are completely natural. The rock is all that remains of the salvage operation. Shortly after the ship had sunk, workers dropped the aggregate rock around the half-submerged port side to prevent scouring and erosion that could have displaced the wreck in the sound's swift-flowing tidal currents. Crews then built a one-of-kind environmental protection barrier around the ship, which became a fixture on the waterscape between the two resort islands over the past two years. The 1-mile-perimeter EPB included sturdy mesh netting below to catch loose vehicles and other large debris and floating oil-retention boom lining the surface. A barge hauled the last section of the wreck from the sound on Oct. 25. Dismantling of the EPB, removing the boom and netting,began shortly afterward in December. Crews on the 'Pacific Horizon' have spent the past month removing the piles, each more than 100 feet long and driven roughly half their length into the sound's sandy bed to frame the EPB. Set in pairs, the last of the piles was plucked from the sound on Jan 23. The EPB is now completely dismantled.

On Dec 29 a barge carrying some of the last remaining scrap metal chunks of the 'Golden Ray' chugged through those same waters, headed out to sea with approximately 2,700 tons of scrap metal from the last two severed sections of the ship, both of which are being dismantled at a site at 615 Bay St. on the East River in Brunswick. The barge is bound for the Modern American Recycling Services facility in Gibson, La. The barge carried five chunks of metal that represented the last of the severed Section 4 and one chunk of steel from Section 5. Salvors at 615 Bay St. are now focused on cutting up what is left of Section 5, about 800 tons. Late next week they will be transporting out the final pieces of the wreck.