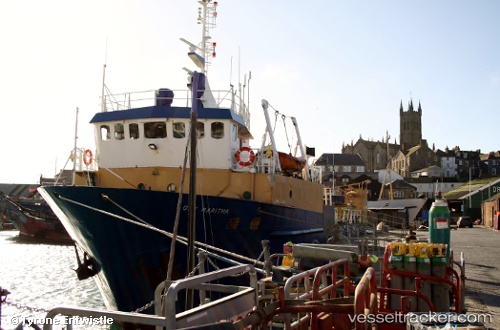 Gry Maritha back on duty after grounding

On Jan 7 the "Gry Maritha" returned back on duty after hitting a rock on the approach to the islands last week. The "Gry Maritha" had been undergoing minor repairs at Penzance Dry Dock after having hit the Crow Rock, around half a mile off St Mary's, while en route from Penzance to the islands. After the damage was assessed the "Gry Maritha" was permitted to return to the mainland for repairs. Due to adverse weather conditions the freighter's scheduled departure on Jan 6 from Penzance to St Mary's had to be put back by 24 hours. There had been concerns about the condition of the surface of St Mary's quay, which had been ravaged by the storms of the past few days. The "Gry Maritha" returned to the islands at lunchtime on where the condition of the quay dictated a departure from normal working procedures. Report with photo: http://www.thisiscornwall.co.uk/Supply-ship-operating-collision/story-20414698-detail/story.html#ixzz2ptR7fIA9

The "Gry Maritha" on its way to St Mary's hit Crow Rock on Dec 30, 2013, at 6.15 p.m. The ship which had sailed from Penzance returned to the mainland under its own power. The alarm was raised by a crewman who called the RNLI and a full investigation has been launched. The master of the vessel was breathalysed by police but the test was negative. The St Mary's harbour master inspected the vessel but found no visible damage. It was necessary to carry out a full inspection in a dry dock at Penzance and had been scheduled for Jan 2. The extent of any damage would be confirmed and it was envisaged that minor hull repairs may be required The company was working on contingency plans to enable some essential supplies to be flown to the islands on its Skybus service instead, weather permitting.