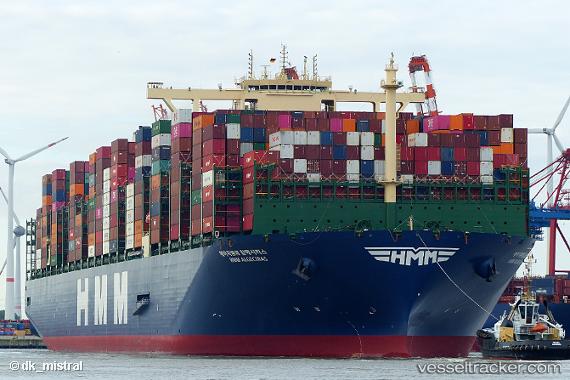 Rotterdam will be the first stopover in Europe for the ''HMM Algeciras' after a temporary restructuring of the Asia-Europe route due to the COVID-19 pandemic. The world's largest container ship will cross the Strait of Gibraltar in the coming days but without stopping at the Port of Algeciras as initially planned. The ship will have its first stop in Europe on its maiden voyage in the port of Rotterdam on June 3. The coronavirus has spoiled the aspiration for the 'HMM Algeciras' to berth for the first time in Europe at the port its name it is bearing. The consortium of shipowners to which the shipping company Hyundai Merchant Marine (owner of the mega-ship) belongs, has temporarily restructured the FE-4 service in which this giant is integrated. For several weeks, this Asia-Europe route that usually stops in Algeciras at the TTI Algeciras terminal will not touch Spanish waters. It will be like this at least between weeks 19 to 26 of this year 2020, which covers the time from May 4 to June 28. Therefore, everything points to the fact that if the market recovers its pulse after the pandemic and the company recovers regularity in its services, Algeciras will once again be a port of call. Rotterdam was already awaiting the arrival of the ship, with a nominal capacity of 23,964 containers. It is 399.9 meters long and 61 meters wide, with a draft of 33.2 meters, and which was launched on April 23. Two days later, on April 25, it set sail from Qingdao, China, and made stops at Busan, South Korea, and at the Chinese ports of Ningbo, Shanghai, and Yantian before crossing the Suez Canal. Report with photos: https://www.europasur.es/maritimas/barco-mas-grande-mundo-coronavirus-HMM-Algeciras-Puerto_0_1468653303.html

Largest container ship in the world on maiden voyage

The 'HMM Algeciras' started its maiden voyage from Qingdao on April 26, 2020, being the larges container ship in the world with a capacity of 24.000 TEU which is about 200 containers more than the previously largest container ship. The ship had berthed in port in the morning and sailed in the afternoon, loaded with 4.560 TEU containing chemical, mechanical and electrical products as well as food products and headed to Busan. The rotation of the ship includes the ports of Ningbo, Shanghai, Yantian, Suez, Rotterdam, Hamburg, Antwerp and London.