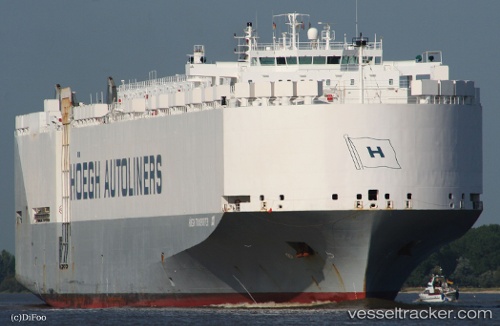 Detention of vehicle carrier based on grave mistake of shipper

On Sep 26 the "Hoegh Transporter" left Daressalam enroute to Beira after it has emerged that the detention of the ship and its 21 crew members, who were not allowed off the ship during the detention period, occurred due to an administrative mistake. The weapons, legitimate and en route to a peacekeeping mission in the Democratic Republic of the Congo, had been declared in the bill of lading, but not in the ship's manifest. Höegh Autoliners regretted a grave mistake on the part of the shipper which has caused major difficulties and delays for other customers, the crew, and ship. The company, with support of the Norwegian Ministry of Foreign Affairs, worked with local authorities to get the ship cleared to continue its voyage to South Africa, west Africa, and Mexico. The co-operation with local authorities has been good, and their reaction understandable given the seriousness of the issue. The owner of the vessel insisted it did not transport weapons due to Höegh Autoliners' policy not to load weapons on vessels engaged in civilian traffic. If they had been aware of the presence of guns inside this consignment of vehicles shipped by United Nations, the cargo would neither have been booked nor loaded. The fact that the vehicles contained guns which were loaded without our knowledge caused a breach of Kenyan laws and our own strict policies. The UN issued a clarification of the oversight which said that a request was sent by the UN contractor responsible for the shipment to the Mombasa ship agent to amend the manifest but since this was not possible, a declaration of the weapons accompanying the military vehicles was attached. The UN also called it unfortunate that the Kenyan authorities had inspected the cargo without a UN presence which "runs contrary to established protocol and provisions surrounding privileges and immunities. The incident caused negative press coverage for the company, with some linking the recent death of UN maritime crime programme co-ordinator Shamus Mangan to the ship. Those reports speculated that Mangan was tracking the ship as part of a UN drugs investigation., however, his death was not related to the ship. Beyond the post-mortem of Mangan's body, no further investigations will be made into the death. The cause of Mangan's death was not publicly known, as police have not issued the post-mortem report. Mangan was buried on Sep 6 in an Islamic cemetery in Mombasa.

A Norwegian-flagged ship that was held in Kenya for more than a week over undeclared weapons belonging to the United Nations has been released, the owners of the vessel said. Kenyan authorities boarded the ship at the port of Mombasa on Sept. 17 and uncovered undeclared weapons in a U.N. shipment destined for peacekeepers in the Democratic Republic of Congo. The U.N. defended the shipment. “Höegh Transporter has finally been released from detention in Mombasa, Kenya, and has continued her ocean voyage,” Hoegh Autoliners, the Norwegian owner of the ship, said in a statement issued on Saturday. The U.N. said the arms were inside armoured personnel carriers destined for its Indian peacekeeping force in the Democratic Republic of Congo. Hoegh Autoliners said it was not aware of the weapons, which contravened its shipping policies. “The fact that the vehicles contained guns, which were loaded without our knowledge, caused a breach of Kenyan laws and our own strict policies. It is highly regrettable,” the company said. There were no drugs found aboard the ship contrary to earlier claims attributed to Kenyan police. “A search for drugs yielded no results involving vessel or crew,” Hoegh Autoliners said. Coastguards and navies in East Africa have struggled to stem the flow of drugs through their waters as the region has become a key export route for Afghan heroin destined for Europe. http://gcaptain.com/kenya-releases-hoegh-car-carrier-after-un-weapons-gaffe-no-drugs-found-inside-ship/#.VgjQtt-vG9I

Weapons discovered by Kenyan authorities aboard a Norwegian ship were part of a legitimate cargo for United Nations peacekeepers and the vessel should not have been inspected without a U.N. presence, a U.N. spokesman said on Thursday. Kenyan authorities said they uncovered weapons and a drug-like substance stashed inside a shipment of U.N. vehicles when they boarded the Norwegian-flagged Hoegh Transporter at the port of Mombasa last week. “It is unfortunate that the Kenyan authorities inspected the cargo without a U.N. presence, which runs contrary to established protocol and provisions surrounding privileges and immunities,” the U.N. said in a statement signed by its spokesman in Nairobi, Nasser Ega-Musa. “We are also aware of the disturbing allegations that drugs were also found on the vessel. This is being currently investigated by the responsible authorities,” he said. Coastguards and navies in East Africa have struggled to stem the flow of drugs through their waters as the region has become a key export route for Afghan heroin destined for Europe. The U.N. statement said the weapons found aboard were part of a legitimate cargo of armored personnel carriers destined for the Indian battalion of the U.N.’s peacekeeping mission in the Democratic Republic of the Congo, the statement said. “It is normal practice for weapons attached to the APCs to be dismantled and placed inside the carriers in order to avoid damage whilst being shipped,” it added. The contractor responsible for the shipment had provided additional information on the arms to Kenyan port officials, the U.N. said, adding it was co-operating fully with them. Hoegh Autoliners, the Norwegian owner of the vessel, said on Wednesday the weapons found aboard had not been declared by the shipper and their presence violated the terms of the shipping agreement. Francis Wanjohi, the regional police commander responsible for Mombasa, told Reuters on Thursday investigations were not yet complete. http://www.mareeg.com/u-n-defends-arms-shipment-in-kenya-calls-drug-claim-disturbing/