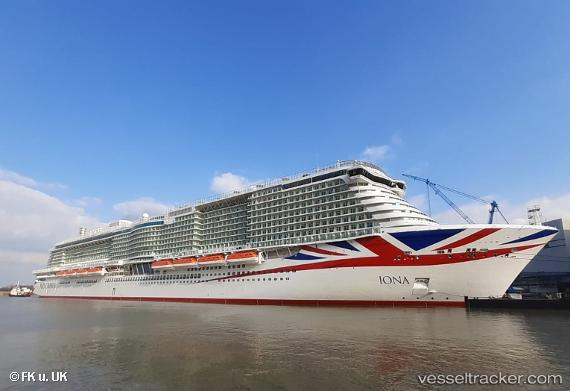 The delivery of the 'Iona' by the Meyer Yard in Papenburg had been postponed to the end of August. Further delays could not be ruled out. The shipyard has already missed two delivery dates of May and July. Originally due to embark on her maiden voyage to Norway in May, the 'Iona' has undergone sea trials and the ship has been essentially finished. It completed drydocking at Damen-Verolme shiprepair and successfully transited the Ems river from the Papenburg shipyard to the outfitting facility at Bremerhaven. Initial sea trials were undertaken, which was followed by the ship sailing to Rotterdam to undergo a dry dock inspection from June 2 to 9, 2020. It was unclear what work was carried out during this period. The 'Iona' recently embarked on a second round of sea trials off the coast of Norway, and has since returned to Bremerhaven on June 21.

P&O Cruises’ new 'Iona' is moving closer to delivery after delays in construction due to the coronavirus health crisis. Currently completing her outfitting, she may become the first large cruise ship to be delivered after the public health emergency delayed and interrupted shipbuilding across Europe. She was expected to depart from Bremerhaven s early as May 30, for technical and nautical trials in the North Sea, before proceeding to Rotterdam for the final steps in her construction. Scheduled to arrive in Rotterdam on June 2, the 'Iona' will enter dry dock for inspection work prior to her delivery. The 'Iona' had been scheduled for an early spring delivery to the cruise line for her maiden voyage at the beginning of May. She emerged fromthe building hall in Papenburg in mid-February and completed her conveyance on the river Ems to Bremerhaven a month later. However, the Meyer Shipyard was forced to briefly suspend work on the ship while a plan was developed in coordination with the Port Medical Service (Hafenärztlicher Dienst, HÄD) and the Bremerhaven Port Authority which allowed the continuation of the outfitting work with precautions for the coronavirus. The corona crisis was causing considerable restrictions in the final fitting of the third cruise ship that will be operating on liquefied natural gas (LNG). The ship is similar in design the 'AIDANova' and 'Costa Smeralda', both also built by Meyer, for other cruise lines owned by Carnival Corporation. The Meyer Yard s in close coordination with P&O Cruises for a delivery date of the 'Iona'. P&O’s cruises are currently canceled through the end of July 2020, and no official date has been announced for the delayed maiden voyage.

In the morning of March 29, 2020, the 'Iona' had to leave the port of Bremerhaven where it was being fitted out by workers of the Meyer Yard Papenburg unplanned. In stormy winds the ship had broken out a bollard on the quay, and three ropes got into the bow thruster. Two tugs pushed the cruise ship at the Columbus Quay. As there was no space to safely berth the ship it was decided it would proceed towards the Northsea to wait until the wind has abated. In the afternoon it was lingering in the German Bight in pos. 54° 25.26' N 007° 30.14' E with a speed of seven knots.