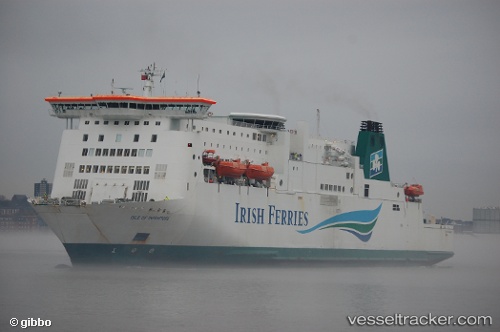 On Nov 3, 2021, the 'Iske of Inishmore' stopped midway through a crossing from Dover to Calais after a craft was spotted drifting at 10.45 a.m., with the captain telling passengers: 'Apologies for the delay but we had to stop and rescue 13 migrants in distress who's boat had run out of fuel and was sinking'.  The ship dispatched a rescue boat which threw a rope to the stricken boat so it could be pulled alongside. The crew hauled all 13 migrants to safety and found two of them were without life jackets. They were all taken to Calais. Report with photo: https://www.telegraph.co.uk/news/2021/11/03/channel-ferry-stops-rescue-migrants-sinking-boat-return-calais/

The Davids all-weather lifeboat was called out on Aug 30, 2020, to the capsized fishing boat 'Braveheart' that had drifted some 150 miles from its home port in southern Ireland, following an alert from the Pembroke Dock-Rosslare ferryy 'Isle of Inishmore'. The St Davids RNLI volunteer crew were paged at 4.47 p.m. to the upturned sports fishing vessel, nine miles west of the lifeboat station. The all-weather lifeboat 'Norah Wortley' was launched to the 20 foot Orkney Longliner that had earlier been sighted by the crew of the 'Isle of Inishmore'. The ferry's lookout spotted the capsized black and blue hull of the boat. The ferry altered course to investigate and HM Coastguard was informed, while one of the ferry’s rescue boats was sent out. Once on scene the 'Norah Wortley' crew determined that there were no people on board, and it became clear that it had broken free of its mooring, which was still attached, at West Cork harbour during Storm Ellen on August 21. The crew attempted to right it multiple times, but it continued to capsize, the mooring buoy was reattached to make it more visible and the crew returned to station at 8 p.m. The owners were contacted, and it was salvaged independently. Report with photos: https://www.westerntelegraph.co.uk/news/18689565.lifeboat-called-capsized-irish-ship-pembroke-dock-ferry-alert/

A crew member died aboard an the "Isle of Inishmore", when it was docked in Rosslare, on March 21, 2019. When the vessel was loading cargo, the man in his 20s was fatally injured in an incident at 7.45 a.m. The coroner and the Health and Safety Authority were notified. The Health and Safety Authority and the Garda have launched an investigation into the incident. The 8.45 a.m. Rosslare to Pembroke and the 2.45 p.m. Pembroke to Rosslare Ferries were cancelled as a result. Crossings of the "Isle of Inishmore" resumed from Rosslare for Pembroke at 8.45 p.m.