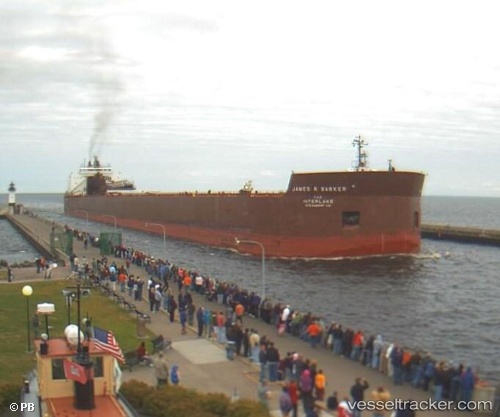 The Great Lakes shipping season was scheduled to end on Jan 15, 2018, but Lake Erie’s ice was forming earlier than usual. The U.S. Coast Guard cutters "Neah Bay" and "Morro Bay" — 140-foot ice-breaking tugs — freed several vessels on Jan 3 and 4 which were hindered by ice in western Lake Erie and the St. Clair River. Cold weather caused ice to form rapidly over Lake Erie, leading to the "John J. Boland", "Hon. Paul J. Martin", "Indiana Harbor" and "James R. Barker" to become stuck in ice. The "John J. Boland" became stuck in ice in western Lake Erie late on Jan 1 and was broken out by the Morro Bay about 8:45 a.m. on Jan 3. The "Indiana Harbor" was beset by ice on Jan 2 in the Middle Channel of St. Clair River and was broken by the Neah Bay. The "Hon. Paul J. Martin" was trapped by ice on Jan 2 in western Lake Erie and was freed by the Morro Bay. The "James R. Barker" was freed in western Lake Erie Tuesday and broken out by the tug "Calusa Coast". It became trapped again and was later freed by the "Morro Bay".

The U.S. Coast Guard and Canadian partners worked together to medically evacuate a 53-year-old man from the "James A. Barker" in the northern Lake Superior on Nov 16, 2017. The Coast Guard received a call at about 4:15 a.m. from the vessel requesting a medevac of a 53-year-old male crew member who was exhibiting symptoms of a medically urgent nature and was recommended by a U.S. Coast Guard flight surgeon to be evacuated to a trauma center. The vessel was determined to be in Canadian waters. Joint Rescue Coordination Centre Trenton assumed command and requested air support from U.S. Coast Guard Air Station Traverse City, Michigan in order to evacuate the crew member in a timely manner. Coast Guard Air Station Traverse City launched a MH-60 Jayhawk helicopter which rendezvoused with the James R. Barker. Coast Guard crew members hoisted and transported the man to Marathon, Ontario, where he was then transported by local EMS to a medical facility in Sault Ste. Marie, Ontario.

The M/V James R. Barker sailed Sunday, June 12 from Fincantieri Bay Shipbuilding Company in Sturgeon Bay, Wisc., becoming Interlake Steamship Company’s first 1,000-footer and its second self-unloading bulk carrier to be outfitted with exhaust gas scrubbers. Interlake became the first U.S.-flag fleet to test scrubbers on the Great Lakes in April 2015 after pioneering the emission-reduction technology on its M/V Hon. James L. Oberstar. “Implementing this innovative scrubber system on our 1,000-foot class ships will make an even greater impact on reducing our fleet’s carbon footprint,” said Interlake President, Mark W. Barker. “Leading the way with emission-reduction technology is just another example of our commitment to continuous improvement across our fleet.” Fincantieri Bay Shipbuilding handled the installation on the 806-foot Oberstar, as well as the second phase of installations on the 1,004-foot Barker and the 826-foot M/V Lee A. Tregurtha, which is slated to sail later this month. http://www.marinelink.com/news/interlake-steamship411116.aspx