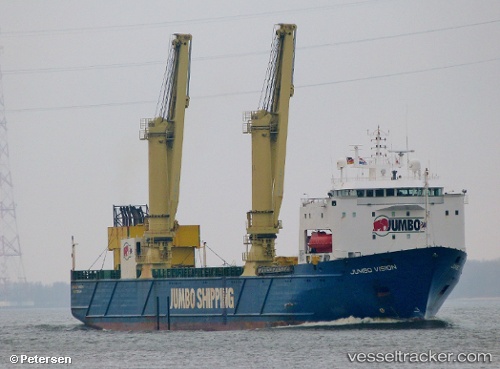 On March 9 the recovery of the two Liebherr mobile cränes lost over board from the ‘Jumbo Vision‘ was completed. The sheerleg ‘Hebo Lift 9‘ pulled the wreckage of the second 400-tons-crane out of the water. On March 8 most of the wreckage of the first crane had been transported away. The manufacturer Liebherr was now assessing whether parts of the cranes could still be used. In the foremidday of March 10 divers started surveying the bottom of the port basin to check if any wreckage or pollutants were remaining. Otherwise the oil barrier would be removed and the port basin be full operable again. During the salvage a safety zone had been established around the area. German report with video: https://www.ndr.de/nachrichten/mecklenburg-vorpommern/Rostock-Bergung-der-Hafenkraene-abgeschlossen,hafenkran148.html

With the salvage operation of the Liebherr cranes that sunk in Rostock Port being underway, the investigation into the cause of the accident was still ongoing. There was currently no evidence to suggest the 'Jumbo Vision'’s cranes came into contact with the cranes loaded on board. Initially, it was suggested by an eyewitness that one of the harbour cranes on deck was tipped over by one of the cranes of the vessel. The subsequent vessel movements then caused a second crane to fall overboard. Based on the still ongoing accident investigation, Jumbo now stated there was no evidence of this, determining the Liebherr cranes were already out of the ship’s cranes when the accident occurred. In addition, the shipboard cranes are undamaged. It was a complex situation in which it will be difficult to pinpoint a root cause. It was expected the investigation may take quite some time before it can be concluded. After repairs aboard the 'Jumbo Vision' had been carried out and were class approved, the ship was allowed to leave Rostock on Feb 20 and was actually enroute from Las Palmas to Tema, ETA March 9. Hebo Maritiem Service’s floating crane 'Hebo Lift 9' was initially supposed to leave Rotterdam on Feb 19 to assist in the salvage of the sunken cranes, but weather conditions on the North Sea delayed this to Feb 26. The arrival of the vessel was finally on March 5. One of the first tasks, however, was the salvage of the two 50 -metre long lattice booms of the cranes, which weigh 35 tonnes each. The specialists from Baltic Taucherei- und Bergungsbetrieb Rostock GmbH had detached the lattice booms of the mobile harbour cranes to salvage these just before the floating crane arrives. This was carried out by the floating crane 'Baltic Lift', which has a maximum lifting capacity of 200 tonnes. On March 3, the first boom was recovered. The second boom was recovered on March 5. After the salvage, the boom parts were cleaned, transported and initially stored on the premises of the Liebherr-MCCtec Rostock GmbH. The cranes itself were to be salvaged by the 'Hebo Lift 9' during the next few days. Both cranes should be lifted onto the quay in one stroke by the crane vessel which has a maximum lifting capacity of 800 tonnes. Including the necessary preparatory work, such as installing the forerunners and attaching the lifting gear, the recovery of the cranes was expected to take several days. The first crane was pulled out on March 8. The second one was to follow once some wreckage on the storage area has been removed. The salvaging of the booms as well as the attaching of the lifting shackles by the Baltic divers took place in close coordination with the arrival of the 'Hebo Lift 9'. This is to ensure harbour traffic will not be impaired by repeated relocation of the oil barrier. The oil barrier was put in place because pollutants leaked from the sunken cranes hydraulic oil and diesel tanks. Divers subsequently emptied the tanks, but the oil barrier has been maintained as a precaution. Reports with photos and video: https://www.swzmaritime.nl/news/2020/03/05/jumbo-no-evidence-cranes-came-into-contact-in-rostock-incident/?gdpr=accept https://www.ndr.de/nachrichten/mecklenburg-vorpommern/Rostock-Bergung-der-Hafenkraene-tritt-in-heisse-Phase,hafenkran142.html

On March 5 the sheerleg ‘Hebo Lift 9‘ arrived in Rostock in order to recover the two Liebherr-cranes which had been lost over board from the ‘Jumbo Vision‘. The ship had sailed from Rotterdam five days ago. On March 6 at the earliest the recovery was due to start. During the recent days divers had partially dismantled the crane wreckage on the bottom of the sea port. One boom has already been lifted, the second was to follow on March 5. The task of the ‘Hebo Lift 9‘ was to raise the engine houses including the chassis and tower. The work will take several days. German report with photos: https://www.ndr.de/nachrichten/mecklenburg-vorpommern/Rostock-Bergung-der-Hafenkraene-hat-begonnen,hafenkran142.html