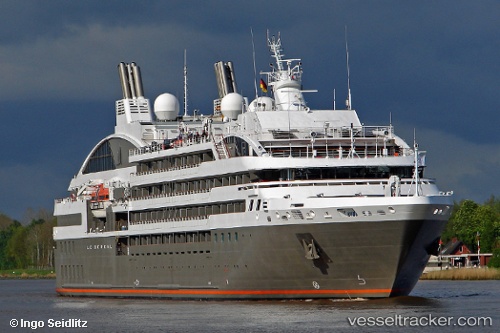 Andrei Madalin Circhea, a Romanian crew member of the "Le Boréal", was killed in an accident which occurred during the dry dock refurbishment of the cruise ship Lin the port of Valparaiso on Nov 18, 2018. The 25 year-old crew member from Constanta, fell 75 feet after he slipped from a ladder placed on the ship’s deck.

Cruise ship broke off her moorings

In the early morning of June 27, 2018, the "Le Boreal" broke off her moorings in Leknes port. The rescue boat "Det Norske Veritas" was called in and got the ship back to the dock. The cruise ship had arrived in Leknes on June 26 and was scheduled to leave the dock at 04.00 a.m. At 3.30 a.m. the lifeboat from Ballstad was called. Upon its arrival the cruise ship was well off the dock with the bow thruster running at full force. The "Det Norske Veritas" was able to push the ship back to its berth just after 4 a.m. It remained on site until the wind has calmed down. The "Le Boreal" had on board 230 passengers and a crew of 136. She finally sailed at 7.30 a.m. and headed to Svolvær and then on to the Troll Fjord and Tromsø. Norwegian report with photos: https://www.an.no/leknes/nordland/ferge/cruiseskip-slet-fortoyningene-ved-kai-i-leknes-havn-vi-klarte-sa-vidt-a-holde-henne-i-kaia/s/5-4-799287

Ponant to mark three decades of cruising in 2018

Ponant, the world’s only French-flagged luxury expedition cruise line, is to mark its 30th anniversary by releasing limited-edition merchandise and hosting exclusive itineraries and onshore events. The cruise line was first established as Compagnie Des Îles Du Ponant on 1 April 1988 by 14 young sailors – including current CEO Jean Emmanuel Sauvée – and was renamed Ponant in 2014. The first ship, Le Ponant, debuted in 1991 and was followed by a yacht named Le Levant, which was acquired in 1999 and then sold to Paul Gauguin Cruises in 2012 to become Tere Moana. In 2004, Ponant purchased luxury vessel Le Diamant, which became Ocean Diamond when she transferred to Quark Expeditions in 2012. The line also debuted four sisters ships – Le Boréal, L’Austral, Le Soléal and Le Lyrial – in 2010, 2011, 2013 and 2015 respectively. Ponant has also ordered six Ponant Explorer vessels – Le Lapérouse, Le Champlain, Dumont D'Urville, Le Bougainville, Le Bellot and Le Surville.