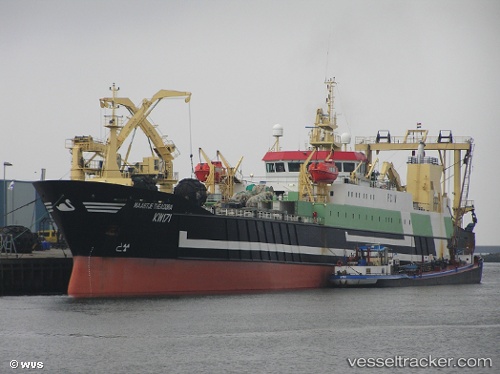 The Westbank Hochseefischerei in Sassnitz, the owners of the "Maartje Theadora" were sentenced to pay a fine of 580 000 Euro by a court in Cherbourg on Dec 18. The owners agreed to plead guily as they were requested to pay a deposit of 1,245 million Euro in case the matter would stay at court for a longer time. The ship's crew was accused to have undertaken illegal fishing for mackerels and to have combined different kinds of nets to have a larger catch. The owners which belong to the Dutch Parlevliet & Van der Plas first had denied the accusations and talked of wrong logs.

After the patrol "Themis" checked the "Maartje Theadora" off Cape Antifer in French waters, controllers found several offenses liek trawls having a mesh size too small for the targeted species. Then, at least half of the 4000 tons of cargo consisted of undersized fish. Target species are mackerel, herring, mackerel. Finally, the captain did not record the actions of its fishing logbook, as it is required. It was regarded as a matte, unprecedented in France. The ship is held in the Normandy dock at Cherbourg. The maritime police has interrogated the master, who did not say much as well as the owner. There is a period of seventy-two hours to find an agreement. The fine will be calculated based on the value of the cargo and the ship which is several million euros. The court may also consider the seizure of the ship. French report with video: http://www.ouest-france.fr/actu/actuDet_-Cherbourg.-2-000-tonnes-de-peche-illegale-dans-le-bateau-usine-[video]_3636-2143895_actu.Htm?xtor=RSS-4&utm_source=RSS_MVI_ouest-france&utm_medium=RSS&utm_campaign=RSS

The "Maartje Theadora" was baffled by a patrol boat of the French Marine Affairs at the port of Cherbourg on Dec 11, 2012, at 5:30 p.m. The ship with a crew of 57 men, among them Lithuanians, Estonians, South Americans and Polish sailors, was controlled off Cape Antifer. A diversion order was finally given shortly after 10 p.m. as of the 3980 tons of fish on board 2,000 tons did not meet European standards. The "Maartje Theadora" has been diverted to Cherbourg where it is moored since the morning of Dec 12. A pilot and two tugs were required for its docking. The operator Parlevliet & Van der Plas is facing a heavy fine and must pay a deposit to get the ship released. French report with photos: http://www.lamanchelibre.fr/cherbourg/actualite-40326-un-des-plus-gros-chalutiers-au-monde-deroute-sur-cherbourg.html http://basse-normandie.france3.fr/2012/12/12/un-navire-allemand-le-maartje-theadora-deroute-sur-cherbourg-mardi-soir-163517.html