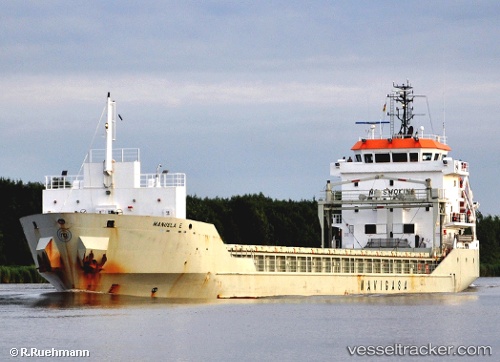 The "Manuela E" which had suffered engine trouble off Estrecho after leaving Gibraltar on Dec 17, 2017, and was towed to Algeciras the same day, left Cadiz after repairs on March 15, 2018, bound to Barcelona, ETA March 19.

The "Manuela E" which had suffered engine trouble off Estrecho after leaving Gibraltar on Dec 17, 2017, and was towed to Algeciras the same day was subsequently to be pulled to Cadiz for engine repairs, arriving there on Dec 30 Dec. Some repairs were now being considered to determine which company will carry out the repair work to the main engine, which will take approximately one month.

The "Manuela E" suffered engine trouble off Estrecho on Dec 17, 2017, after having left Gibraltar around 4 a.m., and requested help. It was adrift about 2,5 miles from from Punta Acebuche (Algeciras). The SAR ship "Salvamar Arcturus" (MMSI: 225986507) was deployed by Salvamento Marítimo from Tarifa and initially stopped the drift by taking the ship in tow. Later the tow was transerred onto the larger salvage tug "Luz de Mar" (IMO: 9320104) which pulled the vessel to the port of Algeciras where it was berthed at 12.30 p.m. She sailed again after repairs on Dec 21 at 5 p.m., next being bound to Cadiz, ETA Dec 31.