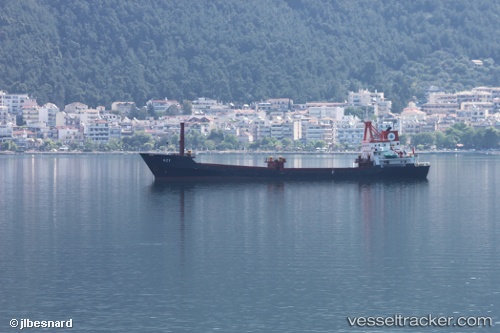 Fire damaged vessel to be auctioned

The 'Act' which was undergoing repairs of fire damage at the Tuzla shipyard, had been arrested by the local court due to an unpaid credit on Feb 28. The vessel was to be sold at auction by the local court at Istanbul on Apr 27. The ongoing repairs which had been due to be completed on Feb 26, were suspended due to the forthcoming auction sale. The fire had broken out in the cargo hold and pertinent spaces on Dec 23, 2019.

During routine maintenance works at Tuzla Shipyard a fire broke out in a cargo compartment together with pertinent spaces on Dec 23, 2019, at 2 p.m. The crew conducted initial fire extinguishing operations, assisted by the shipyard duty fire-fighting team, and subsequently, local fire brigade teams attended the incident scene. No one was injured. However, a detailed technical inspection was to be carried out by the class surveyor together with owners' representatives and shipyard duty engineers. H&M and P&I surveyors, along with class surveyors, will be attending on board, to investigate the cause of fire and the extent of damage. remains stationary at Tuzla shipyard, as of 1800 hrs, local time, today. -- Correspondent.

Greek Coastguard fired on his ship off Rhodes

The Greek Coastguard fired shots on the "Act" in the Aegean Sea off Rhodes on July 3, 2017, Haluk Sami Kalkavan, the captain of the ship has stated in a phone call. The freighter was heading to the Gulf of İzmit from the southern port of İskenderun with a cargo of steel. Kalkavan said the Greek Coastguard instructed him to approach Rhodes port in international waters but he refused to obey the call and briefed the Turkish side of the situation. The Coastguard intended to search the ship for drugs. The Greek Coastguard immediately demanded the ship to anchor off the Port of Rhodes while it was passing around the island. They said they would check the ship but we did not accept that. They then said they would shoot if it didn't stop. The Coastguard then fired shots in the direction of the ship as it was heading to Turkish territorial waters, Kalkavan said, adding that there were 16 bullet holes in the ship. The freighter was now in Turkish waters bound for Marmaris and was not at risk of taking on water. Turkish reports with photos: http://www.ntv.com.tr/dunya/son-dakika-ege-denizinde-turk-gemisine-ates-acildi%2cqMx1tdSeGUiXF_efyl1Tuw http://www.sozcu.com.tr/2017/gundem/yunan-sahil-guvenligi-turk-gemisine-uyari-atesi-1918386/