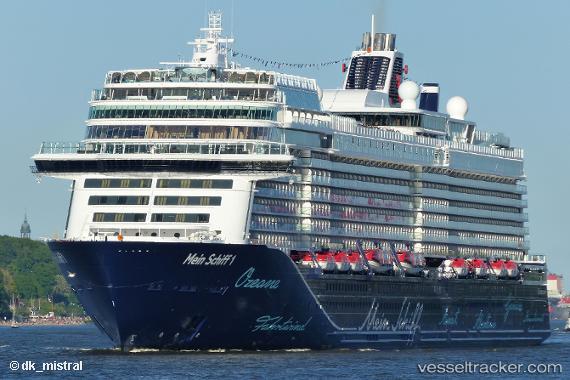 The MRCC in Lisbon has coordinated two medevacs from the “Mein Schiff 1” on Feb 18 and 19 by an Air Force EH-101 helicopter. On Feb 18, at 6:37 p.m. the MRCC in Lisbon received a request for help concerning a 73-year-old passenger while the ship was sailing 220 nautical miles southwest of Lisbon. The passenger's clinical picture indicated the beginning of a cerebrovascular accident (CVA). After contacting the Center for Guidance for Urgent Patients at Sea (CODU-MAR), it was determined that the removal of the German natinal would be urgent. In collaboration with the Air Force, a helicopter accompanied by a fixed-wing aircraft was engaged to carry out the operation. After about four hours, during the early hours of Feb 19, the passenger was safely removed from the ship to the Air Base nº 1, where an INEM ambulance was already waiting to take him to a hospital. The second alert was given on Feb 19 at 08:05 a.m., with a request to take off a 63-year-old passenger of German nationality, whose clinical picture indicated a hemorrhagic stroke. CODU-MAR also determined an urgent medevac, which would be carried out by an EH-101 from the Portuguese Air Force. The man was safely transported from the ship to Air Base No. 6, where an INEM ambulance took the passenger to a hospital.

In the night of Nov 26, 2021, the French yacht 'Agecanonix' (MMSI: 227942370), which was participating in the Atlantic Rally for Cruisers from Gran Canaria to St. Lucia and had set off from Las Palmas on Nov 21, got in distress about 20 miles north of Madeira in wind force 8 and waves of up to five meters height. The boom hit the head of a 73 year old crew member who was seriously injured. The remaining two crew members issued a mayday call which was received by the cruise ship 'Mein Schiff 1', en route from Castries to Bremerhaven with 1.440 passengers. The ship diverted to the yacht and arrived on scene at 6.30 p.m. The “Mein Schiff 1” positioned itself to the windward side of the “Agecanonix” in order to create wind and wave shelter for the rescue operation. A lifeboat was launched and approached the yacht, but the wind increased to more than 40 knots during the maneuver. The yacht got out of control and, despite several attempts, it was not possible to take the sailors off. The injured died in the night hours. Only on Nov 28 at 2 p.m. it was possible to recover the two survivors and the body of the deceased. The yacht was abandoned in pos. 3,71 N, 026° 30,38 W. The castaways were taken on to Funchal. The yacht was equipped with an YB tracker to be able to locate and retrieve it later.

Only two days after a medevac in Cadiz, another passenger needed to be disembarked for medical treatment on a higher medical level on March 26. The ship berthed in Arrecife at 6 a.m. where an ambulance was waiting to take the patient to hospital. The ship left the port again at 11.15 a.m. and headed to Las Palmas, where it arrrived at 6.30 p.m.