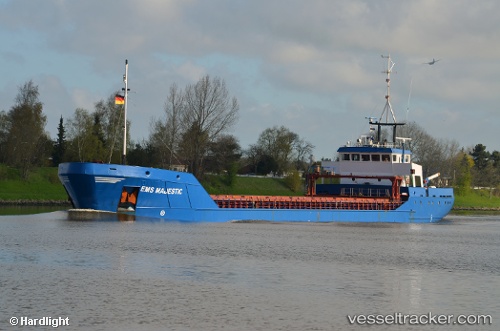 The "Mercy" broke off her moorings at Bizerte, went adrift and allided with the Bizerte drawbridge spanning the Bizerte Channel on Aug 31, 2017, at 10 p.m. The incident took place as the ship was about to leave the port after unloading its cargo. After the ropes broke, the ship was taken by the current and hit the floating part of the bridge on the side of Bizerte town before grazing the commercial wharf. The "Mervy" had berthed in Bizerte coming from Istanbul on Aug 30, being bound for Cagliari. She was detained for inspection and investigation and expected to leave on Sep 2. The bridge didn’t suffer damages and remained open for traffic.

Ship in danger of sinking in Dover Strait

On Dec 6, 2015, the "Ems Majestic" enroute from Rotterdam to Saint Malo with a cargo of grain radioed a Mayday call at 7.09 p.m. after the ship started taking in water in the engine room in the Dover Strait in traffic separation scheme (DST) of the Pas-de -Calais, about 17 miles off Brighton. The vessel reported that they had seven crew members on board and were in danger of sinking 13 miles south east of Eastbourne. A number of vessels transiting the area responded to the Mayday Relay broadcast to provide assistance as required. Coastguard rescue helicopters based at both Lee on Solent and Lydd have been sent to the scene along with Eastbourne RNLI lifeboat. The research vessel "Thor Frigg" (IMO: 9679048) came to assist and took the ship in tow towards Portsmouth. The water ingress could be brought under control by 11 p.m. The Coastguard helicopter crews from Lee-on-Solent, Hampshire, and Lydd, Kent, were also scrambled, and for safety reasons, two non essential crew members have been airlifted from the vessel by a Coastguard helicopter. As a precaution, the tug "Abeille Languedoc", stationed at Boulogne-sur-Mer, sailed in the evening to a position west of the traffic separation zone of the Pas-de-Calais, at the buoy Greenwich. On Dec 7 round 11 a.m. the "Ems Majestic" was off the port of Portsmouth, escorted by the tug "Wye Force" (MMSI: 235000813), and due to berth in Southampton in the afternoon. Reports with photos and videos: http://www.dailyecho.co.uk/news/14128053.Ship_towed_into_Southampton_after_it_started_sinking_in_Channel/ http://www.bbc.com/news/uk-england-35023665 http://news.sky.com/story/1602068/chopper-saves-pair-from-sinking-ship-in-storm http://www.eastbourneherald.co.uk/news/video-eastbourne-rnli-at-the-rescue-of-sinking-cargo-ship-1-7105505