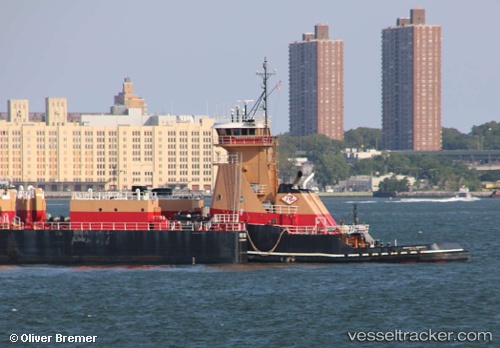 Extreme Hudson River fog and a powerful current contributed to the April 4 grounding of a barge carrying 60,000 bbls. of gasoline at Catskill, N.Y., according to a report from the New York State Department of Environmental Conservation police. The 458’x72’ double-hull barge "RTC 150", pushed by the "Meredith C. Reinauer", operated by the Reinauer Transportation Companies, were hauling the fuel upriver to Albany, N.Y., when the articulated tug-barge got into trouble and hung up on a stone channel marker just south of the Rip Van Winkle Bridge. The ATB was undamaged in the incident, and no fuel spilled. That was a good outcome for the New York maritime industry, as the grounding occured amid debate over proposed new anchorage areas on the Hudson River, an industry supported proposal vigorously opposed by environmental groups and river towns. The Coast Guard has paused its consideration of that plan, while it conducts a study to assess safety risks and other issues. Capt. Steven Hardy, 64, told DEC police he was heading north on the river, pushing against the current in almost zero visibility and relying on electronic navigation. At around 8:15 a.m., the GPS indicated the ATB was on the easternmost side of the channel, and Hardy attempted to steer west and back to the channel center, according to the DEC report. As he attempted to correct course, the oncoming river current, spurred by outgoing tide, began to push the tug and barge sideways resulting in an overcorrection of course. Hardy attempted to compensate and turn back to due north, but this was not sufficient to correct course before the vessel left the western side of the channel and collided with the rocks adjacent to channel marker 121, lying just north of the Catskill Creek outlet. One witness interviewed by DEC police recalled watching the incident from Dutchman’s Landing Park on the river. The man saw only the top and side of the Meredith C. Reinauer through dense fog, as it crossed toward the west side of the river and turned north close to shore before grounding. Hardy and his crew commenced pumping ballast to lighten the RTC 150. Close monitoring of the process through the day by the Coast Guard, Reinaeur and state officers found no sign of spillage or water entering the barge, indicating the outer hull had not been punctured. Additional inspections later at Reinauer’s Staten Island, N.Y., base confirmed the barge was undamaged by the grounding. Reinauer had made preparations for lightering the "RTC 150" if necessary, but pumping ballast and the evening tide coming up the Hudson allowed the ATB to refloat around 9:15 p.m. After anchoring for the night, the tug and barge proceeded to the Port of Albany to next day to offload the gasoline cargo. State officials found no violations as a result of the incident, the report concluded.

The double hull barge "RCT 150" that went aground in the Hudson River on April 4 carrying 60,000 bbls. of gasoline came away without damage to its hull, according to inspections at the Reinauer Transportation Companies headquarters at Staten Island, N.Y. A dive and internal inspection of the 458’x72’ RTC 150 showed the bottom was was undamaged by the incident, as the barge and the "Meredith C. Reinauer2 were hauling the fuel to Albany. The barge went aground around 8:30 a.m. at a stone channel marker on the west side of the river, at the village of Catskill just south of the Rip Van Winkle Bridge. The grounding happened in heavy fog that morning. Reinauer continued to fully cooperate with the Coast Guard in its investigation and will take all steps to be certain it does not happen again. T Built for Reinauer in 2003 by Alabama Shipyard, Mobile, Ala., the "RTC 150" and its Atlantic II-class tug were part of the double hull recapitalization of the U.S. tanker and barge fleet, mandated by the Oil Pollution Act of 1990, passed by Congress in response to the Exxon Valdez spill in Alaska in 1989. Report with photo: https://www.workboat.com/news/coastal-inland-waterways/no-damage-barge-hudson-river-grounding/

The barge "RTC 150" that ran aground in the morning of Apr 4 near Catskill, New York, about 8:30 a.m. off Dutchman's Landing, refloated on its own with the rising tide at 10 p.m. The portion of the Hudson River that runs through Greene County normally rises four to five feet from low to high tide but, because recent snow melt and rain storms have raised the river's level, the tide shifted it by almost six feet in the night, By 3 a.m. The barge and its tug "Meredith Reinauer" were allowed to continue to Albany at 3 a.m. after visual inspections. They arrived in Albany on Apr 5 at approximately 7:00 a.m. Another tug, the "Mary Kay", served as an escort. There were no signs of pollution as a result of the grounding. It was feared the bottom of the barge would tear but no gasoline leaked. Crews were pumping the gas on the vessel into a storage facility at the port. The safety zone restrictions that were in place have been lifted. The cause of the incident was still under investigation. Involved in the response were: Coast Guard Aids to Navigation Team – Saugerties, the Coast Guard Cutter "Katherine Walker", pollution responders and marine casualty investigators from Coast Guard Sector New York, New York State Police Aviation and the New York State Department of Environmental Conservation. Report with photos: http://www.timesunion.com/7dayarchive/article/Barge-hauling-gas-freed-from-Hudson-River-bed-11051621.php