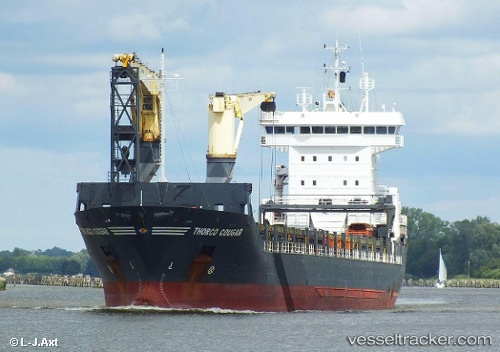 In the early morning of Mar 16, 2014, the "Mar Misool" caused an oil spill in Brunsbüttel. The ship had moored for bunkering, and in spite of the survey by the chief engineer about 50 liters floated onto the deck and part of it into the water. Removal work was initiated and an investigation launched against the responsible officer of the ship. The vessel would only be allowed to continue once all cleaning work has been completed. the ship had just left the Norder Yard in Hamburg and was underway to Rahja.

On Feb 5, 2014, the "Nadja" was auctioned at the court in Bremen. There was only one bid for each the "Celia", "Julietta", "Nadja" and "Angelika" by the MarConsult Schiffahrt-Group in Hamburg which paid 5,5 million Euros for two of the ships and eight million Euros for two other. All vessels had been laid up in the Neustädter Port in Bremen since half a year. German reports with photos and video: http://www.radiobremen.de/politik/nachrichten/schiffe-versteigert100.html http://www.weser-kurier.de/bremen/wirtschaft2_artikel,-Frachter-zwangsversteigert-_arid,772453.html

Cargo ship was in danger of running aground

The Weymouth lifeboat "Ernest & Mable" was launched in the evening of Nov 22, 2012, as the "Nadja" which was moored in Weymouth Bay began to drag its anchor. The lifeboat was launched at 6.40 p.m. last night to stand-by the cargo vessel which was danger of running ashore near Bowleaze cove. In gale force winds of 35 knots gusting to 56 knots and driving rain a potential disaster was averted when she managed to start her engines and limp back to a safe area of Weymouth bay to anchor again. The lifeboat returned to station at approx 9.00 p.m. Report with video: http://rnli.org/NewsCentre/Pages/Weymouth-lifeboat-goes-to-aid-of-cargo-ship-in-storm-force-conditions.aspx