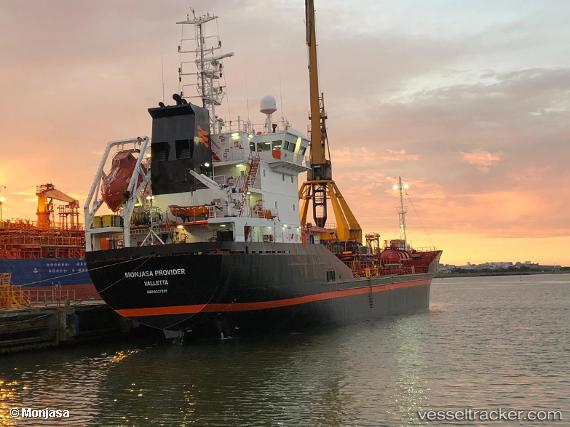 The 'Monjasa Provider', en route from Dunkirk to Le Havre with 12 crew on board, suffered a defect in position 50 38 52 N , 000 50 12 E, on Sep 4, 2020, at 08.20 a.m. The vessel was navigating to the separation line within the TSS to investigate the issue. Communications were held with the Coastguard. The ship was at anchor for about 30 minutes. The repairs have been completed and the vessel arrived in Le Havrre at 10.40 p.m. the same day.

The "Skaw Provider" with a crew of 12 persons on board, while in position 50 36 8.0 N, 002 23 28 W, reported that it has a possible ordnance, struck to its portside anchor, at a10.35 p.m. on March 27, 2019. Explosive Ordnance Disposal (EOD) assistance to ascertain if is ordnance and to assist the vessel. The vessel was to undertake bunkering in position 50 29 N, 000 48 W, from Portland harbour. EOD contacted with photographs and they are not able to confirm if it was ordnance. The "Skaw Provider" was issuing out security broadcasts on CH 16 every 30 minutes, informing about 500 radiuses to be kept clear around the vessel and warning other vessels, as per instructed from EOD. The vessel was now going to submerge the portside anchor, so the ordnance was just under sea level for more protection as per instructions from EOD and it is using its starboard anchor to anchor. EOD was proceeding to the scene. The ship , sailed from Portland on MArch 28 at 4 p.m.

An anchor of the "Skaw Provider" hooked a torpedo off Portland in Dorset on Oct 14, 2017. The tanker had dropped its anchor in 15 metres of water off the port. Navy divers removed it during a five-hour operation. The torpedo was spotted while the tanker was heaving up its anchor. It turned out to be a test torpedo that was heavily corroded and thought to be a few decades old. The crew then called the authorities who dispatched the South Diving Unit of the Royal Navy based in Portsmouth. Most of the crew were evacuated from the vessel although six people including the master remained on board in case they were needed to fight a fire. The ship had on board 1000 tonnes of fuel or oil. The cargo was pumped into the aftermost possible tanks to reduce the effects of any explosion, and fire hoses were charged and ready to deploy if needed. The ship was orderer to use her other anchor to steady her, before lowering the fouled anchor, and the torpedo, to several metres below the waterline. The Explosive Ordnance Device Specialists inspected the torpedo before releasing it and lowering it back into the water. After seven hours the torpedo was destroyed. The device, which was extremely corroded was British made and probably came from a test range at Portland which was in use until the 1980s. Despite being a training munition without a warhead, it still presented a considerable danger as test torpedoes can contain highly flammable propellant. Report with photo: http://www.dailymail.co.uk/news/article-4980076/Royal-Navy-divers-destroy-test-torpedo-caught-tanker.html