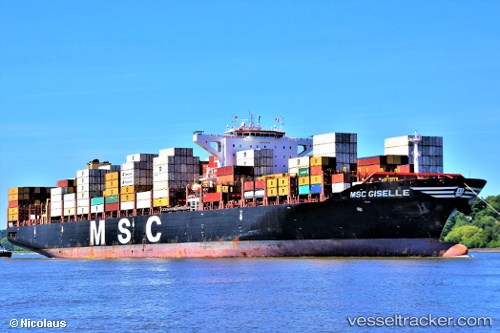 The 'MSC Giselle', en route from Caucedo to Rotterdam, rescued 11 migrants, 10 adult men and a male minor, from a capsized boat approximately 20 nautical miles northwest of Mona Island, Puerto Rico. Their inflatable boat took on water and capsized in the Mona Passage between the Dominican Republic and Puerto Rico. The box ship's crew informed watchstanders at U.S. Coast Guard Sector San Juan on Aug 7, 2021,. at 8:20 p.m. that the vessel was on scene near the capsized boat and people in the water. The Coast Guard diverted the cutter 'Donald Horsley' and an HC-144 Ocean Sentry aircraft to the scene. Shorttime later, the 'MSC Giselle' reportedd that the crew had been able to rescue all persons from the capsized vessel. Upon arriving on scene, the crew of the 'Donald Horsley' embarked and rendered assistance to the migrants, giving food, water, shelter and basic medical attention. The Coast Guard then repatriated the 11 migrant survivors to the Dominican Republic between Aug 9 and 10.