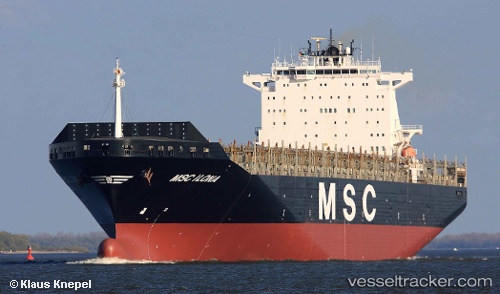 The "MSC Ilona" was spotted adrift and disabled on Sep 17, 2017, in the Arabian Sea off the Oman coast, about 350 miles southeast of its port of destination, Salalah. The ship had sailed from Colombo on Sep 13. On Sep 24 it was taken in tow by the offshore supply tug "Aquila" (IMO: 8714891), towards Muscat. In the morning of Sep 26, the ships were 480 miles east of Salalah. The "MSC Ilona" had drifted more than 200 miles in northeast direction since the power loss. The tow was moving towards Salalah at about three knots speed, ETA Oct 1.

On Saturday night, a miscommunication between line handlers aboard the containership MSC Ilona and those at terminal 4 in the Port of Baltimore resulted in a pickup truck getting pulled right off the pier and into the harbor. A gCaptain source tells us the lineman on the pier put the tag line on the bumper of his truck to pull the line off the bollard. After it was removed from the bollard, he backed up to untie the line, however the mate on the containership heaved around with the mooring winches before the lineman had a chance to unhook his truck. Source and pictures on http://gcaptain.com/pickup-truck-hauled-baltimore-harbor-freak-mooring-incident/

The "MSC Ilona" suffered an engine blackout off Waarde on Oct 2, 2014, while leaving the port of Antwerp. The tugs "Braakman", "Union 5" and "Union 6" were dispatched to Keep the vessel from running aground. After repairs were carried out, the engine could be re-started in the afternoon, and the "MSC Ilona" was able to continue the voyage to Rotterdam with own power where she arrived in the early morning of Oct 3 and docked at the ECT Euro Container Terminal short before 1 a.m. Dutch report with photo: http://www.omroepzeeland.nl/nieuws/2014-10-02/746237/motorpech-schip-westerschelde-verholpen#.VC8GNMjwDIW