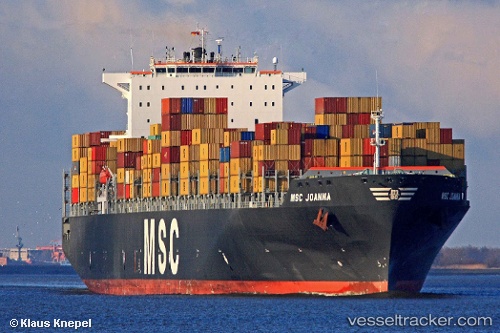 The Authorities in Australia were investigating the smuggling of approximately 200 kilograms of cocaine that was offloaded from the 'MSC Joanna' to a boat at sea off the coast of Sydney on March 11. A 27-year-old South Australian man has been arrested in connection with the seizure. Officials alleged the man launched a small vessel from Taren Point in New South Wales to rendezvous with the 'MSC Joanna' before sunrise on Mar 11. The smaller vessel made its way back to shore before it was intercepted by officers with the New South Wales Police Force who discovered crates containing 199 blocks of cocaine worth an estimated street value of AUS $90 million. The 'MSC Joanna' was underway to Sydney at that time. Following the arrest, the police followed the 'MSC Joanna' until it docked at Port Botany on March 11 where they executed a search warrant. She sailed again on March 15 and headed to Melbourne, ETA March 17.

200 kilogramm cocaine located on board

A 27-year-old South Australian man was expected to appear in Sydney Central Local Court on March 12, 2021, following the seizure of approximately 200 kilograms of cocaine allegedly located on board the 'MSC Joanna' off the New South Wales coast. Australian Federal Police obtained intelligence at the weekend in relation to the cargo vessel allegedly containing a large quantity of cocaine bound for Australia. The AFP established Operation Poitiers with the New South Wales Police Force, Australian Border Force, New South Wales Crime Commission and the Australian Criminal Intelligence Commission on March 6. Australian authorities tracked the cargo vessel as it made its way to Sydney. Through Maritime Border Command, ABF officers provided ongoing monitoring of the vessel, including planning the aerial and on-water response. It will be alleged in court that police enquiries into the illicit drugs and the transnational criminal syndicate behind it linked a 27-year-old Elizabeth Parks man to the alleged drug importation. Aerial surveillance observed the man launching a small vessel from Taren Point and meeting the 'MSC Joanna' off the coast of Sydney before sunrise on March 11.

The Federal Transport Authority of the United Arab Emirates (FTA) has banned the 'MSC Joanna' from operating in UAE waters and ports for a duration of one year over violation of the carriage ban. The ship’s master was banned from working on any ship calling UAE waters or ports, and legal action will be initiated against the master due to the violation of the UAE enforced legislation related to the International Maritime Instruments and the UAE maritime commercial law. The ship was found to be carrying more than 700 MT of high sulphur fuel oil (HSFO) when boarded at Jebel Ali on March 12, 2020, despite the repeated warnings given to the ship to debunker the non-compliant fuel before calling UAE ports. The ship was ordered to offload HSFO before its departure to comply with the carriage ban imposed in the UAE on March 1, the FTA said in a circular. However, the ship sailed out without offloading the HSFO and obtaining the port state control officer’s permission.