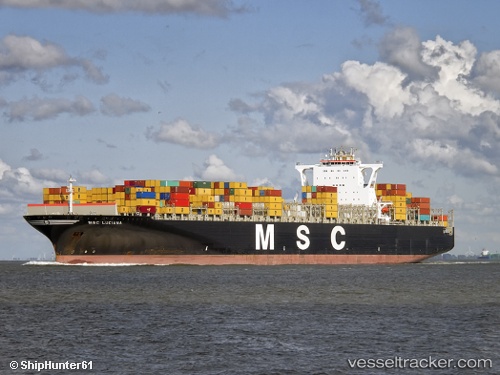 On Nov 21, 201, at 3.30 a.m. the MRCC Tianjin was alerted after the collision of the "MSC Luciana" with the Chinese cargo ship "Sulianhaiji 0118" (MMSI: 413021521) in the Bohai Sea seven miles off the Caofeidian port. The container ship had left Tianjin bound for Busan, and collided with the cargo ship two to three hours later. The "Sulianhaiji 0118" sustained a large hull breach at starboard side amidships with ensuing massive water ingress. The SAR ship "Bei Hai Jiu 119" (IMO: 9763447) was sent to assist. The damaged freighter was taken to Caofeidian, the crew of 16 was safe. Report with photo and video animation: https://www.youtube.com/watch?v=dw38cHuODJ0 http://www.yinhang123.net/zixun/dujia/2017/1123/1103588.html

On Jan 11, 2013, the "MSC Luciana" broke its moorings at the west quay of the container terminal in Ngqura Harbour, Durban, ingale-force winds, with the container ship unable to put out extra moorings in time. The ship had about 22 mooring lines to bollards. First the bow lines started breaking. The tug contracted to hold the ship alongside was not powerful enough, as a single unit, due to windage area and length to hold her. Finally the stern lines broke and the ship was blown onto the Finger Jetty at the opposite quay. It collided square on with the tanker "Marlin", which had broken down off the south coast and was towed into Algoa Bay and finally Ngqura. The wind slewed the container vessel bow-on towards the quay, where the superstructure of the Durban-based pilot boat "Orient" offered little resistance to the immense weight after the boat could not be taken to safety in time. The pilot boat’s hull escaped with little apparent damage but her upperworks were smashed. The harbour tug too had been pushed by the weight and size of the container ship onto the east quay. The "MSC Luciana" was in a very light condition due to the discharge of cargo. Cargo work had been stopped at a wind speed of 70km/h, the wind speed later increased up to about 155 km/h. There was one injury, one crewman on another container ship was hit by one of the breaking mooring lines which broke his leg. The "MSC Luciana" left Durban again on Jan 13 bound for Colobo, where it docked on Jan 22. Reports with photos: http://www.ports.co.za/news/news_2013_01_11_01.php#zero http://ports.co.za/news/news_2013_01_15_01.php http://ports.co.za/news/news_2013_02_01_01.php

on Sep 19 at 4.55 p.m. the "MSC Luciana" which was grounded at Cadsand on the Wester Schledt near Wielingen was pulled off by 10 tugs of Multraship and URS, among them the "Multratug 6" , "10", "11", "16" and "17", the "Gent", "Union Grizzly", "Emerald" and "Smit Tiger" in the second salvage attempt. The ship was pulled to Zeebrugge for inspections. A first attempt after the ship had got stuck at 8.30 a.m. had failed. The pilot had tried to move the ship out of the waterway after engine problems occureed. During this manoevre, the vessel got stuck on even bottom. Dutch reports with photos: http://www.ed.nl/nieuws/algemeen/binnenland/9510045/Groot-schip-vastgelopen-op-Westerschelde.ece http://www.pzc.nl/regio/zeeuws-vlaanderen/9512549/Containerschip-Luciana-vlotgetrokken-op-Westerschelde.ece http://www.tugspotters.com/dev/spots.php?itemid=40724#.Tnch-qhYfOQ.twitter Video: http://www.omroepzeeland.nl/video/schip-vastgelopen-op-westerschelde#.TndfD9R5HrI