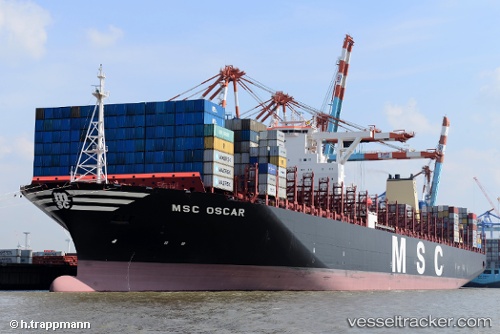 Westbound sailings to North Europe and the Mediterranean to start in September. MSC is pleased to announce sailing dates for the new look Asia network which was announced on Monday 17th August. The full service guide can be found here: https://www.msc.com/che/our-services/east-west-network

On Tuesday evening, 3 March, the MSC Oscar arrived at the APM1 terminal in Rotterdam. With a capacity of 19,224 TEU (20-foot containers), the 396 meters long and 59 meters wide ship is the largest container ship in the world, Port of Rotterdam said in its press release. The MSC Oscar arrived from Algeciras and will leave for Bremerhaven on Wednesday evening, 4 March. On 9 March the ship will return to Rotterdam, where it will be moored at the ECT in the Delta East terminal. After that the MSC Oscar will leave for the Mediterranean via Felixstowe. MSC – Mediterranean Shipping Company – is the second largest container shipping company in the world. The company docks ten to fifteen ships per week at Rotterdam. “We are very happy with the MSC Oscar’s arrival. Her shipping schedule confirms that Rotterdam is the perfect port for this class of ships: the MSC Oscar will be visiting Rotterdam twice. MSC has built up a sturdy position in Rotterdam over the past few years. I hope and expect that the relationship between MSC and Rotterdam will only become stronger in the years to come”, says Allard Castelein, CEO of the Port of Rotterdam Authority.

The new world’s biggest containership by carrying capacity, the MSC Oscar, was christened at the DSME shipyard in South Korea on Thursday. MSC Oscar, built for Mediterranean Shipping Company, has the capacity to carry 19,224 TEU, just barely edging out the 19,100 TEU MV CSCL Globe and her four upcoming sister ships for the title of biggest – at least by TEU capacity – boxship. MSC Oscar actually measures just 395.4 meters long, making it shorter than the 400 meter long CSCL Globe and also the 400 meter Maersk Triple-E’s, which can carry about 18,000 TEU. MSC Oscar’s beam measures 59 meters, similar to the Triple-E’s and wider than the 58.6 meter beam CSCL Globe. MSC Oscar will join MSC’s Albatross service later this month, linking Asia to Northern Europe. A second vessel in the class is expected to be delivered in April.