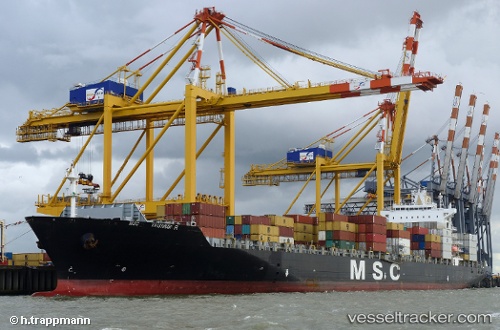 The 'MSC Vaishnavi', while enroute from Bremerhaven to Boston, suffered main engine trouble due to lube oil pump issues while transiting the southwest bound lane of the Dover Strait on MArch 24, 2020, at 10.10 p.m., The vessel was unable to leave the lane for repairs and anchored in its current position to conduct repairs. Safety broadcasts were made by Channel navigation information service (CNIS) and the vessel itself for ships transiting the lane. The CROSS Gris-Nez has been made aware. After repairs were completed, the ship resumed its voyage with an ETA as of April 2.

In the morning of Jan 18, 2018, the "Pretty Ivy" broke lose from its moorings at berth 3 in the outer port of IJmuiden. Three tugs were called to assist the ship. In the Hoogoven Port in IJmuiden the tug "Triton" tried to fasten the ship again. Another tug was ready to push. In the port of Antwerp, the "MSC Vaishnavi R." broke lose and went adrift too. In the Deurganck dock it got perpendicualar to the fairway. Five tugs were needed to maneuver the ship back to its berth.