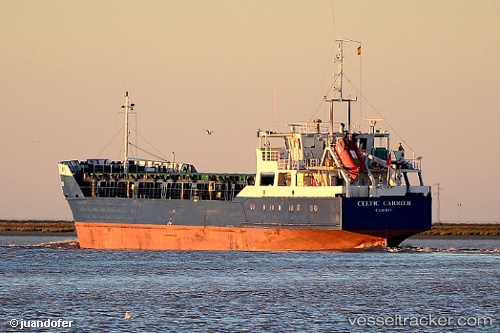 The "Mumammet Gumustas 5" dragged anchor and drifted towards anchored the cargo ship "Verlaine" which was moored at Sinop Anchorage, in the Black Sea, and hit it at port side in the afternoon of Jan 4, 2018. The accident happened in rough weather conditions. Both ships sustained hull damages above the waterline, and remained anchored for surveys and investigations. The ship arrived at Bandirma on Jan 15. Turkish report with photo: https://www.denizhaber.com.tr/sinopta-muhammed-gumustas-5-ve-verlaine-isimli-gemiler-catisti-haber-86143.htm

The "Celtic Carrier" was towed to Cadiz on Apr 26 by the Antigua-flagged tug "UOS Atlantic" (IMO: 9417402), which had sailed towards the casualty at 3.20 p.m. from there, and has meanwhile reached the anchorage off the port. The cargo ship had issued a distress signal at 10.30 a.m. reporting a fire in the superstructure on starboard side which had extended to three cabins. At the time of an accident the vessel was 24 nautical miles west of Cape Trafalgar, en route from Gibraltar, where it had sailed the previous day, to Belfast, where it had been expected on May 2, being loaded with a cargo of cement. Immediately the "Salvamar Atria" from Barbate, the "Luz del Mar" which was called from Algericas immediately after the distress call, and the hydrographic survey vessel "Malaspina" of the Spanish navy, which was five miles from the stricken vessel, responded. Also other ships in the area were alerted but their help was not needed eventually. The "Malaspina" sent a fire team of 12 men to the "Celtic Carrier" who proceeded to attack the fire with their team. Also the patrol boat "Medes", which was 22 miles away, was requested to assist by the Centro de Operaciones y Vigilancia de Acción Marítima (COVAM. Meanwhile, the "Salvamar Atria" fought the fire from outside, flooding the cabin from the portholes through a foam system provided by the Navy. By this they were able to extinguish the fire at 12.45 p.m. The freighter crew of eight maintained contact with the MRCC until having reached the port.