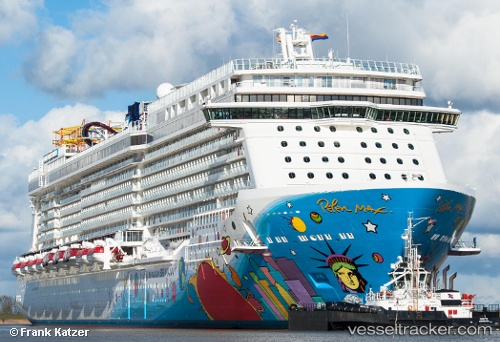 On the last day of a five-night sailing, the 'Norwegian Breakaway' assisted and rescued approximately 20 refugees from an overloaded boat in the North Atlantic. The bridge crew saw the boat, contacted the authorities, and brought the people aboard the cruise ship en route from the Port of Cozumel back to Miami, Florida, on Aug 18, 2022, approximately 30 miles west of Cuba. The cruise ship's captain, Andreas Karlstroem, assessed the situation and determined that the refugees could not remain in the small boat, which appeared to be overloaded with 20 or 30 people. One of rescue boats was launched and transferred the castaways aboard, which took approximately 3,5 hours. Once on board, the refugees received food, water and medical care as needed. The US Coast Guard (USCG) was notified of the situation as the rescue was in progress and took care of the refugees later. Report with photo: https://portalportuario.cl/buque-de-ncl-salva-a-personas-desde-fragil-embarcacion-en-el-caribe/

Passenger missing since jump over board

A 31 year old passenger aboard a the 'Norwegian Breakaway', which was sailing near Coasta Maya, Mexico, jumped overboard on March 11, 2022, has not yet been found. The authorities were immediately notified, and an SAR operation was launched. The cruise ship was scheduled to depart its homeport of New Orleans on March 14 for another seven-day voyage.

The 'Norwegian Breakaway' which had at least 17 passengers and crew members with breakthrough COVID-19 infections when it docked in New Orleans, has set sail again on Dec 6 at 9.25 a.m. with new passengers en route to Roatan. Its Caribbean route from New Orleans includes Cozumel and Costa Maya in Mexico; Roatán, in the Bay Islands of Honduras; and Harvest Caye, Belize. Nine crew members and eight passengers were infected when the Norwegian Breakaway arrived on Dec 5. None had any symptoms and only fully vaccinated people were allowed on board. All passengers who boarded the Norwegian Breakaway on Dec 5 were offered a chance to cancel without penalty.