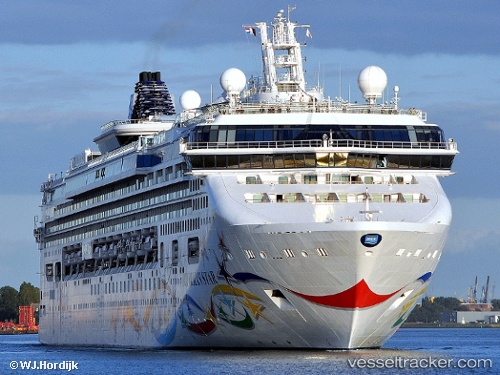 On May 20 the 'Norwegian Star' has arrived at the Port of Rotterdam to repatriate crew members. It has about 200 crew members on board, mainly European and Dutch, who will disembark to return home. The ship is scheduled to set sail from the port at noon after disembarking the on-board personnel. The crew must be picked up and escorted to their transit or final destination and the operation was carried out at the request of the authorities and in accordance with the strict measures currently applied due to the worldwide situation by Covid-19.

The 'Norwegian Star' suffered a problem with one of its azipods on Nov 2, 2019, around 1 a.m. apparently resulting in an alleged fire in the engine room. Passengers were alerted by a loud, shuddering, rattling noise. The ship seemed to stop and we heard 3 short alarm blasts and “Bravo.” The ship skipped the scheduled call at Dubrovnik and headed back to Venice. Passengers were offered a $100 non-refundable credit. NCL altered the schedule of the following cruise on the 'Norwegian Star', dropping calls at Kotor, Santorini, Mykonos. Instead, Split was added to the planned visits to Montenegro (Kotor, Nov 4), Corfu Island, Santorini Island (Nov 6), Mykonos Island (Nov 7), Kefalonia Island, and Dubrovnik. All passengers were notified about the itinerary changes in the early morning on Nov 3, 12 hours prior the scheduled departure at 5:30 p.m. As compensation, NCL offered USD 200 in OBC (per cabin) and plus 20% future NCL cruise booking discount.

Medevac in Sea of Crete

A 70-year-old female passenger of the "Norwegian Star" was in urgent need of hospital care on Sep 3, 2019. A patrol boat took her off and transported her safely to the port of Kyllini, where she was received by an ambulance and transported to Patras General Hospital for medical care.