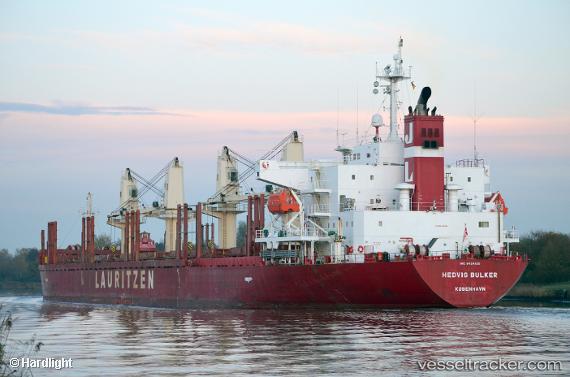 On Feb 3 the four members of the British Royal Air Force which had been rescued by the crew of the "Hedvig Bulker" were brought back to dry land in Port Arthur after a treacherous 51 day, trans-Atlantic attempt from Spain to Antigua in the Talisker Whisky Atlantic Challenge. The team had suffered a broken rudder on day 46 and after exhausting all efforts to fix it in heavy seas, running low on food and water, and near to losing all electronics, they used the little electricity they had left to call for help on their satellite phone. The Maritime Rescue Coordination Centre Falmouth, England, contacted the U.S. Coast Guard's Atlantic Area Rescue Coordination Center requesting assistance on Jan. 23, stating they were disabled after their rudder broke 1,560 miles northeast of San Juan, Puerto Rico. The Coast Guard watchstanders in Puerto Rico used the Automated Mutual-Assistance Vessel Rescue System to contact the nearest Amver participating ship. The "Hedvig Bulker" responded to the Coast Guard's request approximately 69 miles from the row boat's position and diverted to assist. Once on scene the master of the 574-foot ship reported harsh sea conditions which were repeatedly preventing him from getting alongside the row boat. After nine attempts in about five hours, they were able to use a cargo net to hoist each of the four crewmembers up the side of the ship from the heavy seas. The team was participating in a 2,982 mile Atlantic Campaign called the Talisker Whisky Atlantic Challenge, the row boat race from San Sebastian de La Gomera, Spain, to Antigua. Report with photos: http://www.uscgnews.com/go/doc/4007/2085654/Distressed-Royal-Air-Force-rowing-team-saved-brought-to-shore-by-passing-ship#sthash.Zj9i1s8H.dpuf

The crew of four British Royal Air Force personnel from 216 Squadron and 47 Squadron based at Royal Air Force Brize Norton, competing in the Talisker Whisky Atlantic Challenge, have been rescued by the AMVER vessel "Hedvik Bulker". The four were rowing from San Sebastian de la Gomera when when they developed rudder problems and alerted rescue authorities in Falmouth, UK who in turn notified U.S. Coast Guard rescue personnel in Sector San Juan. Personnel at the Sector San Juan command center immediately queried the AMVER system and requested the "Hedvik Bulker" which was enroute from Nouakchott to divert and assist the rowers. Once on scene the master of the ship initially reported harsh sea conditions which were preventing the bulker from getting alongside the row boat. Later he was able to come alongside and safely embarked the four rowers in swells reported to exceed three meters. The survivors were in good health and were to stay aboard the "Hedvik Bulker" until it reaches its next port call in Beaumont, Texas, where it was expected on Feb 2, 2014.