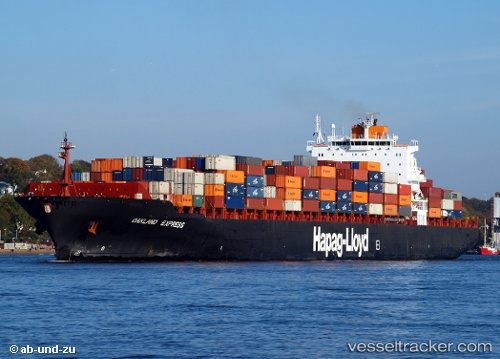 The "Oakland Express" allided with the shore gantry crane while berthing in Vancouver at the Fraser Surrey Dock, British Columbia, in position 49 11 18.1 N, 122 54 46.7 W, on April 5, 2019, at 3.20 p.m. Both the vessel and the crane sustained minor damage. There were no injuries. The ship left the port again on April 9 and headed to Oakland as next port of call, where it arrived on April 11.

The drunken master of the container ship "Oakland Express" (GT 54 465) was arrested by the water police in Bremerhaven. Just before sailing to Rotterdam an alcohol test, according to the police led to 2.16 per thousand alcohol in blood. The ship had been proven on Monday evening with a driving ban. After the captain was sobered, the sailing ban was lifted and the ship left early yesterday. The "Oakland Express" was built in 2000 by Hyundai in Korea and is the management of the Greek shipping company Costa Mare. The ship is chartered by Hapag-Lloyd.