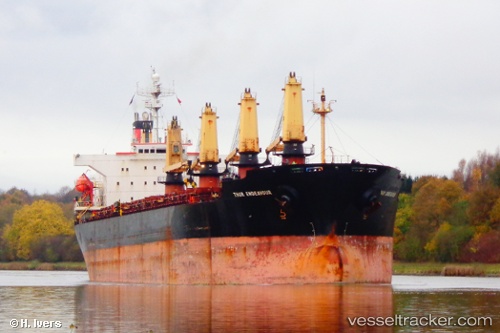 Thoresen Shipping has sold the "Thor Endeavour" for scrap, fethcing $ 4,25 for the vessel. The sale leaves the company with a fleet of20 vessels with an average age of 11,58 yearswhich is in line with the company's strategy to remove older tonnage. The latest sale was the "Thor Horizon" for $ 5,4 m in November 2017.

On Nov 10, 2017, at 3.30 p.m. the "Thor Endeavour", enroute from St. Nazaire to Klaipeda, allided with steel poles sheltering the old jetty 3 upon entering the Southern lock of the Kiel Canal in Brunsbüttel. The accident happeened despite assistance of two tugs. The bulkcarrier had been caught by a wind gust and drifted perpendicular. AFter the tug had the ship back under control, it could enter the lock. It had suffered a long bruise or breach, and one of the poles was bent. The allision was investigated after the ship was inside the lock, and it was then detained and moored at the Navy pilings in the inner port of Brunsbüttel. The sailing ban was lifted on Nov 12, and the ship resumed the voyage at 4.30 a.m. Around 2 p.m. it passed the locks in Holtenau towards the Baltic Sea. German report and photos: http://www.forum-schiff.de/phpBB3/viewtopic.php?f=2&t=23#p142173 http://forum-schiff.de/phpBB3/viewtopic.php?f=2&t=23&p=142213#p142213

Coming from Ijmuiden, the "Thor Endeavour" allided with the tug "Bugsier 15" in the New Southern lock of the Kiel-Canal in Brundsbüttel upon entering on June 10, 2017, at 9.30 a.m. The tug was assisting the bulkcarrier at the bow and was pushed into the gate. Part of the fendering of the tug tore off and got stuck at the gate. Workers tried to remove it before it could fall into the water, which would enforce a closure of the gate for the salvage. The "Theor Endeavour" may only continue the canal transit with a permanent tug assistance. Around noon she proceeded towards Kiel on the way to Kalmar with the "Bugsier 15" as a stern tug despite of the slight damage such as dents and bruises it had suffered. It then headed to the Warnemünde Yard in Rostock for repairs where she docked on June 11 at 4 p.m. The bulkcarrier continued its voyage from Kiel after a two hours break and reached Kalmar on June 11 at 6 p.m. German reports with photos: http://www.kn-online.de/News/Nachrichten-vom-NOK/Kollision-in-der-Schleuse-Brunsbuettel. http://www.boyens-medien.de/artikel/dithmarschen/missgluecktes-manoever-in-der-schleuse.html