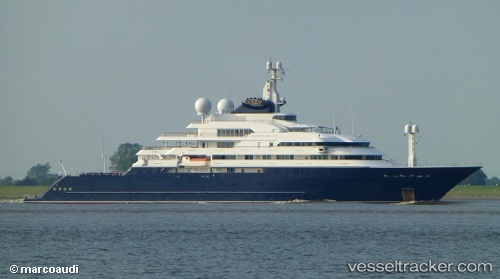 Allen-Yacht put up for sale

The yacht brokers Fraser and Burgess has now offered the "Octopus" for sale for 295 Millionen Euro (about $325.2 million). The yacht was built for Microsoft founder Paul Allen 16 years ago in Kiel. After Allen's death in 2018, many of his iconic belongings and portions of his empire were put on sale, including the world's largest plane, developed by Allen's aerospace company Stratolaunch. Last week, the Octopus joined the list. It's one of the biggest private superyachts in the world, and can hold 26 guests and 63 crew members. The yacht has been refitted this year and offers all typical luxury features, including a pool and hot tub, a spa, a bar and a gym. It's also got some more extravagant perks, like a specially designed recording studio and cinema, a glass-bottomed underwater observation lounge, elevators and a basketball court,.

On Mar 3, 2015, Microsoft Corp. co-founder Paul Allen stated that he has found the "Musashi", a former Imperial Japanese Navy’s battleship, which was sunk in the Sibuyan Sea in the Philippines in October 1944 during World War II, and posted photos from the seabed. The "Musashi" and her sister ship "Yamato" were the world’s biggest battleship during the war. Musashi was sunk when she was heading toward the Leyte Island of the Philippines. Of the 2,399 crew aboard, more than 1,000 died. The American billionaire Allen, who has also pursued space exploration, said the "Octopus" found the wreck one kilometre deep on the floor of the Sibuyan Sea. The "Octopus"’ remote operated probe Octo ROV located the wreck on Mar 2. The "Octopus" is also outfitted with an exploration submarine. Report with photos: http://www.theguardian.com/world/2015/mar/04/us-billionaire-paul-allen-discovers-wreck-of-japans-biggest-warship-musashi

Could it be the M/Y Octopus moored off Patong, Phuket, Thailand? 29 December 2012