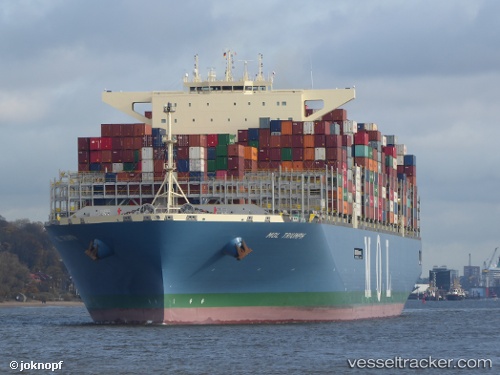 The biggest ship to dock in UK and Germany has arrived in Hamburg, coming from Southampton, on May 15, 2016. It is the first of a new type of ultra-large container vessels to enter service in 2017. Its operators claim it is more fuel efficient than previous carriers. Built by Samsung in South Korea, the ship will run between Chinese and European ports. It can hold the equivalent of 20,170 containers. The ship is the first of MOL's fleet of six 20,000 TEU-class vessels. It is on its first trip to northern Europe since entering service earlier in 2017. Coming from Southampton, it berthed at the Burchard Quay in Hamburg at 9 p.m. Reports with photos: http://www.forum-schiff.de/phpBB3/viewtopic.php?f=2&t=6298#p136656 http://www.bbc.com/news/uk-england-hampshire-39882244 http://www.ndr.de/nachrichten/hamburg/Container-Riese-nimmt-Kurs-auf-Hamburg,containerriese106.html

The world’s largest container vessel in service, MOL TRIUMPH called at Hongkong International Terminals (HIT) during her maiden voyage. With a capacity of 20,170 TEU, MOL TRIUMPH measures 400 metres long and 58.8 metres wide. The new vessel is equipped with new sustainable technologies to provide more efficient fuel consumption and improved environmental performance. Built by Samsung Heavy Industries Co., Ltd., MOL TRIUMPH is the first of six 20,000 TEU-class container vessels of Mitsui O.S.K Lines, Ltd. (MOL). It will be deployed for Asia-Europe trade via THE Alliance’s FE2 service. MOL TRIUMPH set sail from Tianjin Xingang on 4 April 2017 and has called at the ports of Dalian, Qingdao, Shanghai and Ningbo before arriving in Hong Kong. Her maiden voyage will also bring her to Yantian, Singapore, and onwards through the Suez Canal to Tangier, Southampton, Hamburg, Rotterdam and Le Havre. She will call at Hong Kong again when routing back to Tianjin Xingang.

Mitsui O.S.K. Lines, Ltd. is pleased to announce that the MOL Triumph, the world’s largest containership with a carrying capacity of 20,170 TEU, successfully arrived at Yangshan Port in Shanghai on April 10, 2017. MOL took delivery of MOL Triumph, the first of six 20,000 TEU-class containerships from Samsung Heavy Industries Co., Ltd. on March 27, 2017(*). At 400 meters in length and 58.8 meters in width, MOL Triumph is longer than the Oriental Pearl Radio and TV Tower of Shanghai is tall. Deployed in THE Alliance’s Asia to Europe trade via the FE2 service, the MOL Triumph set off on her maiden voyage in the beginning of April and has already made three Chinese port of calls at Xingang, Dalian and Qingdao before arriving at Shanghai. She will continue to sail to Ningbo, Hong Kong, Yantian, Singapore, and will then transit through the Suez Canal and continue on to Tangier, Southampton, Hamburg, Rotterdam and Le Havre. On the way back to Asia, she will call at Tangier and Jebel Ali. The FE2 service provides fast, direct and dependable service to/from China, Southeast Asia, West Mediterranean and North Europe.