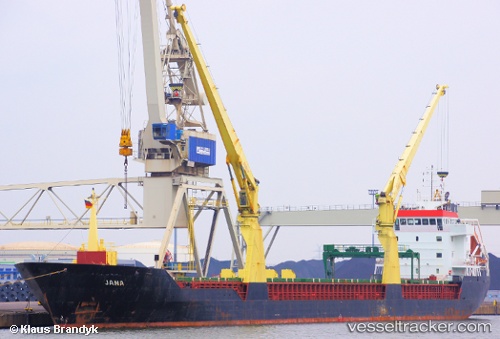 The "Baby Leeyn" which had to be towed back to Argentia in late November 2017 left the port in the morning of Jan 9, 2018. It had been tied up there for almost two months after running into trouble off Cape St. Mary's, alliding with the Marine Atlantic dock and causing hundreds of thousands of dollars worth of damage. It later drifted within two nautical miles of land, and the Cape St. Mary's Ecological Reserve. The Argentia terminal was closed for the season at the time, and there were no injuries reported. Argentia dock repairs should be done before seasonal ferry service to N.S. resumes. The insurance companies for Marine Atlantic and theowners of the "Baby Leeyn" were working through the details of who was going to pay for the required repairs. The repair work was expected to begin early in t2018 and were to be done before Marine Atlantic resumed sailing out of Argentia in June. The "Baby Leeyn" was towed into Argentia in 2014, when it was still called "Jana", after running into engine issues offshore. The vessel changed ownership last fall and was on its way to Romania when its engine failed again. Report with photos: http://www.cbc.ca/news/canada/newfoundland-labrador/mv-baby-leeyn-leaves-argentia-after-tow-1.4479140

The "Baby Leeyn" which was towed to safety early on Nov 27, had allided with the dock in Argentia even before leaving port. The Department of Fisheries and Oceans confirmed on Nov 29 that the crew of the vessel failed to notify Marine Communications and Traffic Services when the incident occurred. Transport Canada was unable to inspect the ship for damage because it left port immediately after the incident. The organization only learned about the collision when notified by Marine Atlantic. Upon returning to port, the ship was inspected, finding no damage as a result of the allision. But the bow of the ship left a hole in the wharf and damaged pilings that support it. Officials were still evaluating know how much it will cost to repair the dock. The "Baby Leeyn"'s agent said the ship's insurers were dealing with the matter. Report with photos: http://www.cbc.ca/news/canada/newfoundland-labrador/cargo-ship-that-went-adrift-near-cape-st-mary-s-hit-dock-before-leaving-port-1.4425658

Vessel threatened to run aground on first voyage after three years

The "Baby Leeyn" ex "Jana" was disabled and adrift south of St. John’s with 11 crew members on board, including eight Ukrainians and three Russians in the morning of Nov 26, 2017. The tug "Beverly M" was able to attach a towing wire to the ship around 6:30 p.m. one mile off the rocks at the Cape St. Mary’s Ecological Reserve. There were northern winds on scene with gusts of 60 km/h, the waves were topping six metres. After the towline had parted due to poor weather conditions, a second tug was contracted by the Canadian Coast Guard, the "Placentia Hope". She managed to secure the freighter which could be anchored in 20 metres water depth about 2,6 kilometres from land west of the Cape. While there was no cargo onboard the"Baby Leeyn", it was carrying 250 tonnes of heavy propulsion fuel and 35 tonnes of marine diesel. An environmental response team and equipment were currently in St. Brides, where they were establishing a staging area as a precautionary measure. The ship had been tied up in Argentia in September 2014 after running into engine troubles offshore.´The ship's owners refused to pay the crew, and many stayed in the province to fix the ship. The ship's original captain died in Placentia in fall 2017. It was unclear how many of the crew from 2014 were still on board when the vessel left on Nov 25, when, after three years, she set sail for Romania. However, she made it only 12 kilometres offshore before experiencing engine troubles again. While adrift, the ship's crew continued efforts to fix the engines. The Coast Guard told them to draw up an emergency response plan, which resulted in the crew calling for a tug. The "Placentia Hope" started towing the "Baby Leeyn" to Argentia overnight. The CCG ship "Sir William Alexander" accompanied the vessels until the "Baby Leeyn" was secured in Argentia. The tug "Beverly M1" also accompanied the convoy. The bulk carrier’s crew remained onboard and continued working on fixing the engine. Weather and sea state conditions were starting to improve in the evening of Nov 26. Wind speeds remained at 25–30 knots, gusting to 40 knots were expected to decrease overnight. Waves were still 3-4 metres but were expected to drop to 2 – 3 metres. A Provincial Airlines surveillance plane was also on scene monitoring the vessel in the night. On Nov 27 around midday the ship was finally pulled into port by the two tugs. Reports, photos and video: https://globalnews.ca/news/3882621/disabled-cargo-ship-towed-to-community-in-eastern-newfoundland-coast-guard/ http://www.cbc.ca/news/canada/newfoundland-labrador/ship-adrift-mv-jana-coast-guard-1.4420435 https://pbs.twimg.com/media/DPovR5oW0AAXISV.jpg https://twitter.com/twitter/statuses/935121582250450944 http://ici.radio-canada.ca/nouvelle/1069663/cargo-derive-leeyn-terre-neuve-atlantique-panne-moteurs-acadie