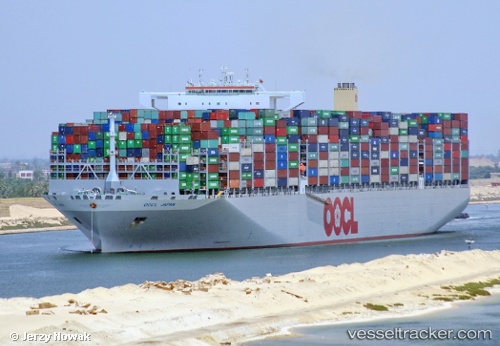 Car fell into a gap caused by grounding of container ship

The "OOCL Japan", being enroute from Singapore to Felixstowe, ran aground during the transit of the Suez Canal on Oct 18, 2017, around noon. The steering gear malfunctioned, and the rudder went hard over and stayed put until the engineers fixed the glitch. The ship got stuck on the embankmemt and got perpendicular to the fairway. The "Maersk Kimi", which was following the container ship, was able to stop in time. Tugs were deployed to pull the "OOCL Japan" off again. The vessel suffered damage below the water line to the fore peak tank which required underwater repairs. On Oct 26 the vessel berthed in Felixstowe. Photo: http://forum.shipspotting.com/index.php?action=dlattach;topic=15962.0;attach=5967;image