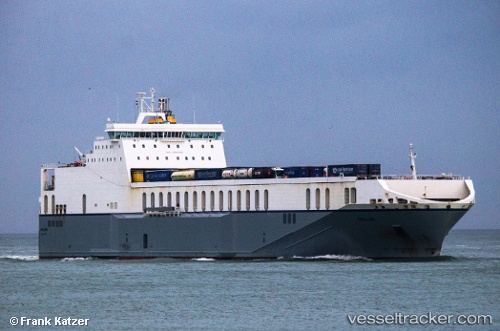 The' Opaline', while en route from Rotterdam to Leixoes with 20 crew members amd a cargp of 7.585 tonnes on board, encountered an issue with its safety valve on the main engine in position 51 20 55 N, 001 50 51 E on Oct 1, 2020, at 12.25 p.m. The crew carried out repairs, and durning the following transit of the Dover Strait traffic separation scheme, the Solent continued to monitor the passage of the vessel. The ETA at Leixoes was Oct 5.

The "Opaline", enroute from Rozenburg to Killingholme with a crew of 22 on board, suffered problems with its injectors and the engine in position 53 24.13 N, 000 49.11 E, on Feb 26, 2019, at 7.20 a.m. 28 miles off Spurn Head,. The vessel dropped anchor and was awaiting the arrival of the tug "Nobleman" to tow it to the Humber Outer Anchorage. At 7.40 p.m. the ship was safely berthed at the roro terminal of the North Killingholme Haven in Immingham.

The "Opaline", en route from Zeebrugge to Purfleet, allided with the Linkspan on Oct 24, 2018, in position 51 28 06.6 N, long 000 15 17.4 E. The vessel sustained a hole of two square meters two feet above the waterline on portside. A further allision on starboard side resulted in a smaller hole. The vessel reached Purfleet at 9.15 p.m. and docked at berth 44 in Tilbury at 10 p.m. No pollution reported.