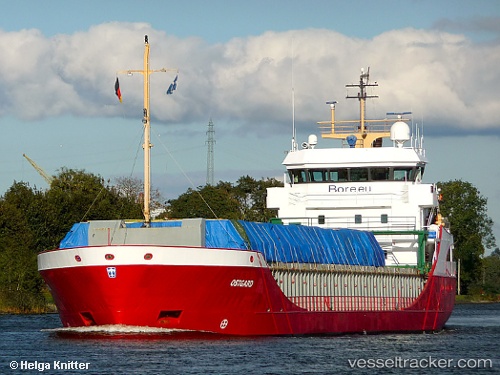 Oil leak in the engine room

The 'Ostborg', while enroute from Erith to Villgarcia De Arosa, ETA March 29, suffered a lube oil leak in the engine room about 4,5 miles from Dover on March 25, 2021, at 6.45 p.m.An investigation was in progress, and was is not yet clear how the long the repairs would take. On March 26 the ship was moving with five knots through the English Channel.

Collision in Gulf of Finland

In the morning of Feb 25, 2018, the bulkcarrier "Ourania", enroute from St. Petersburg to Ashdod, was in collision with the "Ostborg", which was enroute from Lomonosov to Tallin, in the Gulf of Finland south of the Porvoo Kalbådagrund lighthouse. The Coast Guard of the Gulf of Finland received notification at 10 a.m. The ship suffered a breach in the bow above the waterline but managed to continue their journey without external assistance. No one was injured in the accident. Presumably, the ice has slowed down the other ship's speed so the "Ourania" ran into its stern. Neither ship had loaded dangerous goods and there was no environmental damage. A Dornier of the Coast Guard Dornier was monitoring the site, also the "Uisko" was deployed to the area. The "Ostborg" headed to Tallinn after the accident and dropped anchor on Feb 25 at 4.30 p.m. Finnish reports with photos: https://www.hs.fi/kotimaa/art-2000005581982.html http://www.raja.fi/tietoa/tiedotteet

Finnish group Bore is selling its general cargoship fleet to focus on ro-ro operations. The company said on Tuesday it is offloading six vessels that constitute its contract of affreightment (CoA) business, which has suffered from “several years of over-capacity and unsustainably poor profitability.”It blamed the small size of the CoA fleet for its uncompetitive position against larger players in the tough general cargo sector. The 3,700-dwt Nordgard (built 1999) and the 3,800-dwt Sydgard and Westgard (both built 2000) and Ostgard (built 2001) are being bought by Wagenborg, for delivery by the end of December. All this will lead to a maximum of 19 out of 31 shore workers being made redundant at Bore.Limestone shipper Nordkalk has agreed a three-year deal with the new owner to carry cargoes up to 2017.