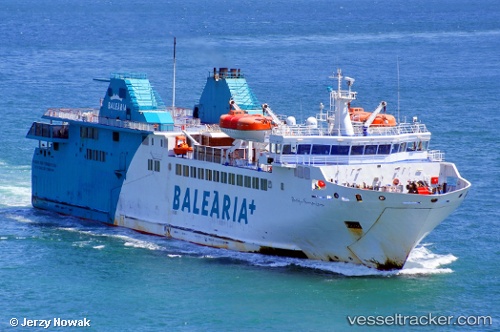 On Jan 24, 2020, the 'Pasió Per Formentera' suffered engine trouble and was forced to suspend the sailings between Ceuta and Algeciras at 6:00 a.m. and 8:00 a.m. The booked passengers were relocated to the next sailing of a ship of the company which was the ‘Avemar Dos’ that left the port of Ceuta at 7:30 a.m., arriving in Algeciras at around 8:30 a.m. After the technical failure was rectified, the ‘Passió Per Formentera’ was operational again on the scheduled trip at 10:45 a.m. from Ceuta.

The "Passió Per Formentera" suffered a breakdown in the Alboran Sea on Dec 21, 2018, enroute from Ceuta to Algeciras. A fire in the auxiliary engine compartment could soon be extinguished, but left the ship without its propulsion about five miles from Ceuta, where it had sailed at 6 a.m. The fire protocol has been activated, the 109 passengers were mustered on the deck where they have been provided drinks and something to eat. In additon, there was a crew of 29 on board. The interior of the ferry has gone dark, only with emergency lights on. The SAR vessels "Salvamar Atria" and "Luz de Mar" were deployed to take the ship in tow back to port where passengers and vehicles were to be disembarked and the ship inspected. Also the tugs "VB Hispania" (IMO: 9476018), "VB Bulldog" (IMO: 8207692), and "Sertosa Veintisiete" (IMO: 9060974) were sent to assist and reached the site around 9 a.m. The ferry schedule was actually interrupted but was to be covered by other ships of the company. The "López Anglada" replaced the ferry which was towed into the industrial port of Ceuta at 12.30 p.m. The "Passio del Formentera" sailed from Ceuta on Dec 21 arrived at APM Algeciras on Dec 23. Spanish reports with photos and video: https://www.ceutaactualidad.com/articulo/puerto/passio-per-formentera-llega-puerto-mas-horas-despues-quedar-propulsion-medio-estrecho/20181221122707076517.html http://www.ceutaldia.com/articulo/puerto/109-pasajeros-primer-balearia-siguen-atrapados-medio-estrecho-conato-incendio/20181221103704191827.html https://elfarodeceuta.es/averia-motor-deja-passio-per-formentera-deriva-estrecho/ Balearia https://cadenaser.com/emisora/2018/12/21/radio_algeciras/1545376493_173434.html

Ferry allided with quay in Ceuta

The "Passio per Formentera" suffered a mechanical breakdown in the night of May 10, 2016, around 9 p.m. during the docking manoever in Ceuta. The ship slammed into the edge of the dock, a rope broke and hit a nearby street lamp. Both the bow of the ferry and the quay suffered damage. The ramp could be lowered, so that the vehicles could leave, but it could not be closed. Repairs should be carried out until May 11. In the meantime the ferry company has rescheduled the departures of the "Poet Lopez Anglada" and the fast ferry "Jaume II". The scheduled sailings from Algeciras at 6 a.m. and from Ceuta at 7.30 a.m. were cancelled. Spanish report with photos: http://elfarodigital.es/ceuta/maritima/186308-accidente-del-passio-en-el-muelle.html