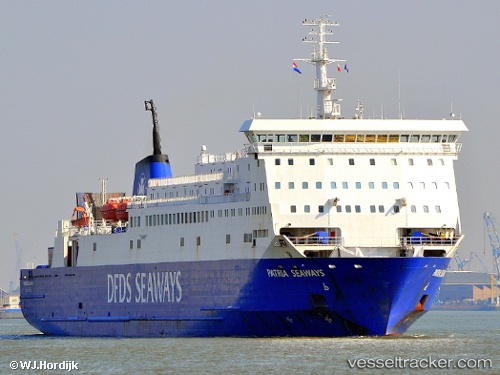 The "Patria Seaways" when being about to leave the Klaipeda port bound to Karlshamn in the evening of July 28, 2019, only moved to the quay of the 8th Klaipeda Stevedoring Company (Klasco) after the failure of one of its engines. While the ferry can sail with one engine, it was, however, decided to moor it and wait for a technical team to repair the faulty engine during the voyage. Accompanied by the tugs "Klasco 1" and "Klasco 3", the ferry left the dock at about 11.30 p.m., 3,5 hours behind schedule. The ship arrived at Karlshamn around 4 p.m.

On Nov 25, 2013, one person died in an elevator accident aboard the "Patria Seaways", which was sailing between Kapellskär and Paldiski. The crew member was clamped on the roof of an elevator used by both staff and passenger while the ferry was entering Kapellskärs port at 11.25 a.m. Because the ferry was about to dock it took some time before he got help. The man had, by yet unclear reasons, made his way up through a hatch in the roof of the elevator. When the elevator started again the man was crushed. An inquiry was launched by the Norrtäljegatan Police.

Baltic Scandinavian Lines announced that it brought the "Lisco Patria" to the Estonian-Swedish route of Paldiski-Kapellskär. The ship will sail on all days of the week except Fridays. "Lisco Patria" departs from Paldiski North port 15 minutes after midnight and reaches Sweden at 9.20 a.m. It will sail back to Paldiski at 10.30 a.m. the same day to be back at 10 p.m. Tallink operated Paldiski-Kapellskär passenger ferries for years, but now operates the route with cargo ferries.