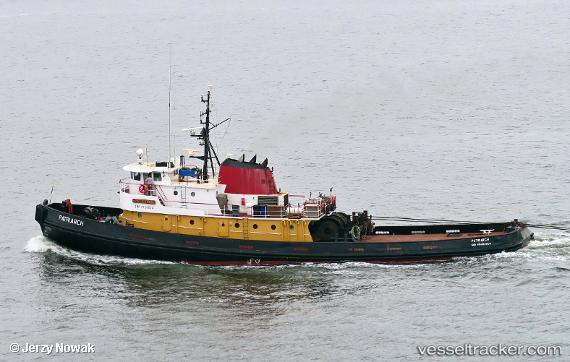 An ailing crew member was medevaced from the 'Patriarch' on Aug 4, 2020, approximately 207 miles of east Turks and Caicos, and 287 miles north of Puerto Rico. The tug was en route from Jacksonville to San Juan, Puerto Rico, when the vessel's master contacted Coast Guard Seventh District command to request a medevac for a 59-year-old man on board who was suffering from medical complications and needed higher level medical care. The Coast Guard coordinated with the tug to transit closer to Turks and Caicos for the medevac. A Coast Guard Air Station Clearwater MH-60 Jayhawk helicopter crew forward deployed in Great Inagua, Bahamas, hoisted the man and safely took him to Providenciales, Turks and Caicos. An Air Station Clearwater HC-130 Hercules aircraft crew was also on scene during the medevac as a self-recovery asset and a communications platform for the Jayhawk helicopter crew. Once both aircraft were in Providenciales, the man and a Coast Guard rescue swimmer were transferred to the Hercules aircraft. The Hercules aircrew safely transported the man in stable condition to awaiting emergency medical services in St. Petersburg. Report with video: https://www.marinelink.com/news/video-ailing-crewman-medecaved-crowley-480699

The Coast Guard was monitoring the fire aboard a 730-foot container barge about 40-miles southeast of Freeport, Bahamas on Mar 8. A commercial fire fighting tug boat arrived on scene at approximately 2:30 a.m. to begin extinguishing the fire and another tug was en route to further assist. There continued to be no threat to the general population or the seven crew members aboard the "Patriarch". The Coast Guard Cutter "Robert Yered" was on scene to assist with communications between the vessels involved and to provide search and rescue efforts if necessary. Watchstanders at the Seventh District Command Center in Miami received a call from the Patriarch at 12:30 p.m. on Mar 7 reporting the container barge they are towing had caught fire. Report with photo: http://www.uscgnews.com/go/doc/4007/2115146/Update-Coast-Guard-continues-monitoring-container-barge-fire#sthash.97d5ZwpI.dpuf

Barge of Patriarch on fire

SAR coordinators at the District Seven Command Center in Miami were coordinating fire-fighting efforts of an unmanned 730-foot barge with containers on fire about 86 miles northeast of Nassau, Bahamas, on Mar 6, 2014. The Command Center received a call from the "Patriarch" which had sailed from Jacksonville on Mar 5 short past midnight and was bound for San Juan, about 12:30 p.m., stating a fire started from the cargo boxes of the barge. There was no threat to the seven crewmembers aboard the tug at this time. The "Patriarch" was en route to Nassau, Bahamas to be closer to commercial salvage and fire fighting capabilities. The Coast Guard Cutter "Robert Yered" has been diverted to the area to assist with search and rescue efforts if necessary. An HC-144A Ocean Sentry aircraft crew, from Coast Guard Air Station Miami, was monitoring the vessel and the extent of the fire. Report with photos: http://www.uscgnews.com/go/doc/4007/2113762/Correction-Coast-Guard-responding-to-barge-on-fire-off-Bahamas#sthash.E4jbTPbQ.dpuf