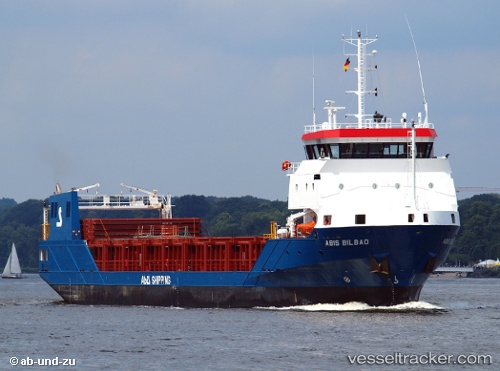 Freighter disabled in the English Channel

On Feb 7, 2019, around 7 a.m. the CROSS Jobourg responded to the "Peak Bilbao" which was requesting towing assistance following a total blackout due to a water ingress on the bridge after violent waves broke the windows at starboard side which caused damage to electrical installations such as the loss of the cardboard, communications and the propulsion of the ship. Only a handheld VHF was still working. The vessel, enroute from Rotterdam to Bilbao, was eight miles west of the Casquets traffic separation scheme in the British zone in pos. 49 53 22 N, 003 04 19 W, 30 miles southeast of Salcombe. The response was thus coordinated by the Solent Coast Guard. As a preventive measure, the Cherbourg Marine Operations Center immediately deployed the emergency tug "Abeille Liberté" for possible towing which arrives on site at 10.45 a.m. After negotiations with the shipowner, a towing contract was closed, and the "Abeille Liberté" then started towing the cargo ship. The CROSS Jobourg resumed the coordination of operations by keeping British Coast Guards informed. At noon the vessels commenced their transit to the port of Cherbourg where the freighter arrived around 10 p.m. and received additional assistance by the port tug "Cherbourg 1" (IMO: 9793088). The "Peak Bilbao" left the port again on March 18 at 7.40 a.m. being towed by the tug "En Avant 1" (IMO: 9342102). It was bound to Rotterdam, ETA March 20, and sailed again on March 21 at 7 p.m., still under tow of the tug "En Avant 1" (IMO: 9342102), bound to Sczcezin, where it arrived on March 27, receiving further assistance by the tug "Euros (IMO: 7041546). The "Peak Bilbao" left the repair yard again on June 1 and headed to Swinoujscie, where it berthed on May 2 at 1 a.m. before proceeding to Riga on June 7 at 11 a.m. French reports with photos: https://www.premar-manche.gouv.fr/communiques-presse/remorquage-du-cargo-peak-bilbao https://www.lamanchelibre.fr/actualite-661881-l-abeille-liberte-reprend-du-service