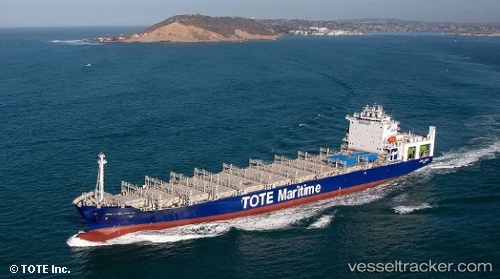 TOTE Maritime’s new LNG-powered containership Perla Del Caribe arrived in Puerto Rico on Friday after sailing around Hurricane Matthew. AIS data showed the American cargo ship moored in San Juan as of 3:30 p.m. EDT. The ship departed from Jacksonville, Florida on Tuesday ahead of Matthew but as part of its regular route from JAX to San Juan. Although the ship seemed to navigate well away from Matthew’s path, the story made headlines as the storm arrived exactly one year after the loss of the El Faro with all 33 crew. The El Faro was sailing on the same Jacksonville to San Juan route when it sailed directly into the path of Hurricane Joaquin as storm approached the Bahamas. Perla Del Caribe is one of two new LNG-powered Marlin ships TOTE Maritime built to replace older tonnage including the El Faro. https://gcaptain.com/totes-perla-del-caribe-arrives-in-puerto-rico-after-avoiding-hurricane-matthew/

General Dynamics NASSCO has delivered the world's second container ship to be operated by LNG, the Perla Del Caribe. The ship was delivered two months ahead of schedule and is the sister ship of the world's first LNG-powered container ship, the Isla Bella, also built by NASSCO for TOTE Maritime. As part of a two-ship contract signed in December 2012 with TOTE, the 764-foot long Marlin Class container ships will be the largest dry cargo ships powered by LNG. This green ship technology dramatically decreases emissions and increases fuel efficiency when compared to conventionally-powered ships, the equivalent of removing nearly 16,000 automobiles from the road. http://maritime-executive.com/article/second-lng-container-ship-delivered

On December 11, General Dynamics NASSCO completed bunkering of liquefied natural gas (LNG) for the Perla Del Caribe, the world’s second containership to be powered by LNG. Bunkering services were provided by the California-based company Clean Energy as well as Baker Hughes and Envent during a 48-hour period at the NASSCO shipyard in San Diego. Representatives from NASSCO worked collaboratively with several regulatory agencies to prepare for the event, including the U.S. Coast Guard, the American Bureau of Shipping, the San Diego Fire Department, and the Air Pollution Control District. The Perla Del Caribe received 210,000 gallons of LNG which is nearly double the amount bunkered for its sister ship, the Isla Bella, the world’s first LNG-powered containership. The Isla Bella was built by NASSCO and delivered in October of this year. http://www.marinelink.com/news/containership-caribe402423.aspx