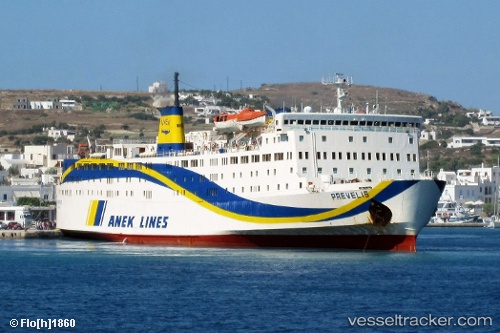 The Port Authority of Piraeus was informed in the evening of May 3, 2022, that hte 'Prevelis', which had previously sailed from the port, requested its return, because a crew member needed immediate hospital treatment. The 41-year-old man was provided with first aid on board, while after the arrival of the ferry in port, he was transported by ambulanceto the General Hospital of Piraeus, where he was pronounced dead. The ship continued on its route Milos - Thira - Anafi - Sitia - Kasos - Karpathos - Diafani - Halki - Rhodes with 262 passengers on board. An autopsy-necropsy was ordered by the Central Port Authority of Piraeus, which was conducting the preliminary investigation.

Woman in critical condition after fall on board

The Port Authority of Thira was informed in the early morning of Sep 10, 2021, that a 74-year-old passenger of the 'Prevelis', which was operating a scheduled route coming from the port of Anafi, was injured aboard the ship and was in critical condition. When she fell, she injured her left upper extremity and right lower extremity. The ship sailed to Thira, where the patient was disembarked and picked up by an ambulance. She was transported to the General Hospital of Thira. A preliminary investigation was carried out by the Port Authority.

The 'Prevelis+' lost its port side anchor while proceeding off the island of Kasos on March 20, 2021. The vessel continued its scheduled service to the Pigadios anchorage at theport of Karpathos, where the Port Authority detained the vessel until another anchor was fitted and a seaworthiness certificate was issued by the attending classification society. The vessel was carrying 65 crew members, 54 passengers and 48 vehicles at the time of the incident. It sailed from the port of Karpathos at 7.50 p.m., headed to Rhodes.