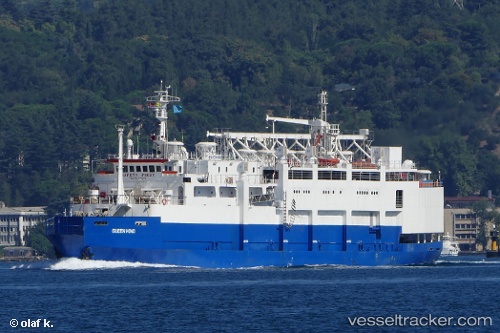 The 'Queen Hind' was finally raised in the evening of Feb 25. The ship was carrying 14,600 sheep when it capsized in Midia on Nov 24. A total of 254 sheep were rescued from the ship but only 180 of them survived. For the salvage, the Grup Servicii Petroliere (GSP) used the largest sea crane in the Black Sea basin, the 'GSP Neptune'. More than 100 GSP employees and collaborators were involved, and a team of 20 divers worked in four shifts. Next, the biological cargo was to be loaded into special containers and transported to an incinerator in Tulcea county, where it will be disposed of. Reports with photos: https://www.marinelink.com/news/livestock-carrier-queen-hind-refloated-476027 https://www.news.ro/social/update-nava-scufundata-in-portul-midia-la-sfarsitul-lunii-noiembrie-a-fost-adusa-la-tarm-1922402425002020022019278756 https://www.news.ro/social/directorul-apmc-in-privinta-operatiunii-de-ranfluare-de-la-midia-s-au-facut-progrese-credem-ca-in-scurt-timp-o-sa-inceapa-partea-de-ecarisaj-1922403818592020021319269528

Secret decks for extra animals have been found by divers aboard the 'Queen Hind' which sank off Midia, drowning thousands of sheep. Only 180 sheep survived out of the 14,600 initially believed to have been onboard the vessel. But the revelations about secret decks were likely to increase the death toll by several thousands, and raise questions on whether overloading was to blame for the capsize. On Feb 1, 2020, the Grup Servicii Petroliere (GSP Offshore), which won the tender for the wreck removal, made its first attempt using the sheerlegs ‘GSP Neptun‘ (MMSI: 249915000) and 'GSP Granit' (IMO: 7620005), but operations were halted after the crane’s cables were unable to bear the load and broke. During the operation, the divers entered the water, and found additional decks. These additional decks also contained tousands of animals. The decks were not included in the cargo plan and were undeclared and increased the ship's weight to 1.380 tons instead of 800. Of the 254 sheep rescued from the ship several died later of exhaustion and injuries – 180 survived and were now being kept in a location north of Bucharest. Reports with photo and video: https://www.youtube.com/watch?v=wluiLfw_7Zs https://constanta.ro/2020/02/02/autoritatile-din-portul-midia-incurca-procesul-de-ranfluare-al-navei-queen-hind-pentru-a-ajuta-cateva-firme-private/ https://ziarulamprenta.ro/stirile-zilei/video-detalii-complete-de-ce-a-esuat-operatiunea-de-scoatere-a-navei-queen-hind/49837/

..for the start of salvage operations: https://www.youtube.com/watch?v=189360wqyqo&feature=youtu.be